The Law of the Lord is Perfect 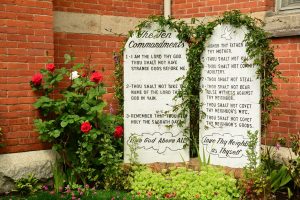 In a previous blog post, I went through Psalm 1 and tried to explain how it relates to holiness. Today, I want to do something similar by taking a look at Psalm 19:7-8. Here we find David writing about the exceedingly great value of God’s commandments. We’ll look at some of David’s statements about God’s law and its effects and try to unpack them.

It Restores the Soul

The first phrase we’ll look at is the beginning of verse 7. In the preceding section of Psalm 19, David has been poetically explaining some of the wonders of creation and how these point to the wonders of their Creator. Psalm 19:1 contains the famous words, “The heavens declare the glory of God.” After speaking of these things, he immediately transitions to the subject of God’s instructions. For some, the commandments may not seem quite as wondrous and inspiring as the glory of the heavens or the awe-inspiring circuit of the sun. But they were for David, and as we will see, they should be for us too.

In each statement David makes in this part of the Psalm, he uses a different word to refer to God’s instructions. Then he ascribes a particular quality to God’s commands, and finally he explains an effect that they have on the one who pays attention to them. To understand this more clearly, here is the first phrase: “The law of the LORD is perfect, restoring the soul.”

The word that David uses to refer to God’s instructions here is “the law.” In Hebrew, this is the word torah. Most of the time we see this translated as law, but it also means teaching or instruction. In English, the word “law” seems somewhat cold. Reading through legal codes hardly sounds like an inspiring activity. But David is speaking of God’s teachings, His instructions, His laws. God’s commandments are more akin to the instructions of a loving parent. As Proverbs 1:8 says, “Hear, my son, your father’s instruction and do not forsake your mother’s teaching (torah).”

We are told that God’s Torah is perfect. This is echoed by the apostolic authors. For example, James 1:25 says, “But the one who looks into the perfect law, the law of liberty, and perseveres, being no hearer who forgets but a doer who acts, he will be blessed in his doing.” The law is perfect because it is an expression of God’s character. The commandments are not just a random collection of antiquated legal rules. They reveal God’s will for His people. They show us what is important to God, and thus what should be important to us.

The third part of this phrase we’ll look at is the fact that God’s law restores or refreshes our soul. This idea is also found in Psalm 23:3, “He restores my soul. He leads me in paths of righteousness for His name’s sake.” There are a couple of different ways we could understand this. First, God’s commandments restore us to right conduct. They keep our soul from harm when we obey them. When we bring harm to ourselves through sin, we must repent and return to God, asking for forgiveness and, with God’s help, returning to the path of righteousness. Thus our soul is restored. Another way of understanding it is that we can feel the encouragement and restoration of our souls through God’s commandments. God created us to take delight in Him and to be refreshed when we obey His commands. God calls out to Israel through the prophet Jeremiah: “Stand by the roads, and look, and ask for the ancient paths, where the good way is; and walk in it, and find rest for your souls.” And Yeshua echoes this invitation to those who will hear Him: “Take my yoke upon you, and learn from me, for I am gentle and lowly in heart, and you will find rest for your souls” (Matthew 11:29).

It Makes Us Wise

The second half of verse 7 says, “The testimony of the LORD is sure, making wise the simple.” “Testimony” is a term we are probably familiar with from legal situations. In this sense, a testimony is a formal legal statement whose truthfulness is guaranteed by an oath. In some Christian groups, when someone gives their testimony, they share the story of how they came to faith in Yeshua. The sense this word has in the Bible is a little bit different. It can refer specifically to the physical tablets of the Ten Commandments, as a kind of legal covenant document; for example, as Exodus 31:18 says, “And he gave to Moses, when He had finished speaking with him on Mount Sinai, the two tablets of the testimony, tablets of stone, written with the finger of God.” Thus, the ark of the covenant is also called the ark of the testimony since the tablets were stored inside (Exodus 26:34). On the other hand, the term can also be used to simply refer in a general way to the commandments (1 Kings 2:3; Psalm 78:5).

We are told that the testimony of the Lord is sure. Other translations say “trustworthy” or “steadfast.” In other words, they are dependable. God is faithful and dependable and trustworthy, and His commands express this aspect of His character. God never changes, but He remains the same yesterday, today, and forever. Since the commandments are an expression of His will, they too are unchanging.

Another effect of God’s commands is that they make the simple person wise. When God gave the commandments to Israel, He emphasized this characteristic of His laws. In Deuteronomy 4:5-6 Moses says to the people, “See, I have taught you statutes and rules, as the LORD my God commanded me, that you should do them in the land that you are entering to take possession of it. Keep them and do them, for that will be your wisdom and your understanding in the sight of the peoples, who, when they hear all these statutes, will say, ‘Surely this great nation is a wise and understanding people.’” This is reemphasized in 2 Timothy 3:15, where Paul says to Timothy, “from childhood you have been acquainted with the sacred writings, which are able to make you wise for salvation through faith in Messiah Yeshua.” This is a very practical kind of wisdom which manifests in action.

It Brings Joy to the Heart

We now come to the first part of verse 8: “The precepts of the LORD are right, rejoicing the heart.” A precept is like a general rule or commandment. This particular Hebrew word is found only in the Psalms.

The precepts of the Lord are called “right,” not in the sense that they are correct (although of course they are correct), but that they are just or pleasing. God is just, as He says in Isaiah 51:8, “For I the LORD love justice; I hate robbery and wrong.” He wants His people to be like Him in this regard. He instructed the Israelites, “Justice, and only justice, you shall follow, that you may live and inherit the land that the LORD your God is giving you” (Deuteronomy 16:20). And in Micah 6:8 we read, “He has told you, O man, what is good; and what does the LORD require of you but to do justice, to love kindness, and to walk humbly with your God?” The prophets consistently emphasized that punishment was coming because justice was not being upheld, and they saw a day when finally justice would prevail: “The LORD is exalted, for he dwells on high; he will fill Zion with justice and righteousness” (Isaiah 33:5).

David tells us that God’s precepts bring joy to our hearts. Earlier we talked about the refreshing of our souls that can come from God’s commands, and this is a similar thought. We will experience a supernatural joy that comes from a close relationship with God. We will know the inner joy of the sheep obeying the voice of the Shepherd who leads us to quiet pastures..As Psalm 32:10-11 says, “Many are the sorrows of the wicked, but steadfast love surrounds the one who trusts in the LORD. Be glad in the LORD, and rejoice, O righteous, and shout for joy, all you upright in heart!”

It Enlightens the Eyes

The final phrase we will examine here is the second half of verse 8: “The commandment of the LORD is pure, enlightening the eyes.” The word for commandments is mitzvot. As we have seen, each of the words used in this section are roughly parallel to “commandments,” but they each have a slightly different sense. The word in this phrase, mitzvot, comes from the root for “to command,” which emphasizes that these are instructions from a superior.

God’s commandments are pure. They are ethically pure because they come from a pure intent. Human commandments may be inspired by selfish motives or simply the desire to exercise authority. Commands from a dictator can be cruel. This is not the case with God. He gives us commands because He loves us and these commandments are an expression of His love. Additionally, the commandments are spiritually pure because they bring us to sanctification. Here is what 1 John 3:3-4 says: “And everyone who thus hopes in him purifies himself as he is pure. Everyone who makes a practice of sinning also practices lawlessness; sin is lawlessness.” God’s commands are pure and when we make a practice of obeying them, we too are purified.

The commandments of God enlighten our eyes. There are a couple different ways we could understand this. First, we could say this refers to our spiritual vision. Yeshua uses the metaphor of blindness to portray a lack of spiritual understanding. For example, in Matthew 15:14 He says, “Let them alone; they are blind guides. And if the blind lead the blind, both will fall into a pit.” The commandments of God bring focus to our spiritual vision so that we can see the truth. The second sense in which this could be understood is that enlightened or brightened eyes also appear to be an idiom for life or joy. For example, we read in Ezra 9:8, “But now for a brief moment grace has been shown from the LORD our God, to leave us an escaped remnant and to give us a peg in His holy place, that our God may enlighten our eyes and grant us a little reviving in our bondage.” (Also see Psalm 38:10 for the opposite.) We are all familiar with a similar English idiom: when we say that someone’s eyes lit up, it means that we could see energy or pleasure in their eyes. The Psalmist tells us that God’s commands can light up our eyes in this same sense.

This has covered only two verses in this Psalm, but as we have seen there is a lot packed into a small amount of space. David correctly understood the value of God’s instructions. They were a guide to him in his most faithful moments. He knew that God’s commandments are an expression of who He is and a means of growing closer to God in our relationship with Him. Let us follow David’s example by meditating on God’s commands and living them in faith through the power of the Holy Spirit who dwells in us.