Pentecost: The Birthday of the Church 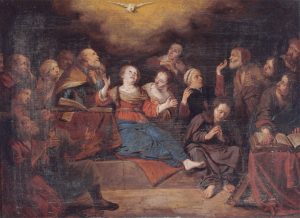 Traditionally, the birthday of the Christian church has been the Feast of Pentecost. Before Yeshua (Jesus) ascended into heaven, He told His disciples to stay in Jerusalem and pray till the blessing of the Holy Spirit came upon them. The Bible tells us in Acts 1:12-15 that 120 people gathered to pray and they were in one accord. Starting from the day after the Feast of Passover till Pentecost, the Jewish people count the Omer which is simply counting the days: 50 to be exact, till the day of Pentecost, which means “fifty.” At the time of the Ascension, 40 days had already been counted. On the day of Pentecost, by Jewish law found in the Torah, the people would have gone to the temple to worship, for this was a holy feast day and it was there that the Holy Spirit came upon them with the sound of a mighty wind and it filled the place where they were (there are different opinions on where these people were because the word “house” could refer to God’s house) and tongues of fire came upon the 120 people who had been waiting for this blessing. Did they know that it was coming on the day of Pentecost? No! Because Pentecost was the day they celebrated the giving of the Torah on Mt. Sinai. So, if Pentecost was the giving of the Holy Spirit and the birth of the church, was the first Pentecost, which was the giving of the Torah, its conception? Let’s take a closer look.

The Giving of the Law

Exodus 19:1-2 tells us that it was the third month after the people had left Egypt that they came to Mt. Sinai. Exodus 19:3-8 continues to say that God asked the Jewish people to enter into a covenant with Him. God the King was also God the Bridegroom, who was about to marry Israel, for He had chosen her to be His special people, His Segulah, His Bride. The people said, “Yes,” so God, through the Torah, writes up a Ketubah, which is simply a marriage contract which was written according to the manner of an ancient covenant of its time. The Torah, like those ancient covenants, is an agreement between a king and His subjects. The king tells the people what he will do for them if they obey his covenant and what will happen if they disobey. If we look at the book of Deuteronomy, we see just how this agreement was set up. The Preamble of this contract begins in chapter 1:1-5. The History Prologue starts in chapter 1:6 and goes to 4:49. The Stipulations begin in chapter 5:1-26:19. The Blessings and Curses begin in chapters 27-30, the Witnesses in 30:19, the Succession in 31:1-8 and the Deposit/Reading of Contract in 31:9-13. This shows how an ancient contract was written in the time of Moses and the people were very familiar with it. God and the people had made an everlasting agreement that shall never be broken.

The Kingdom now had its chosen people and the King had His Bride. The people were now a nation, a holy nation, a kingdom of priests, a special people, and the people of God (Exodus 19:6, 1 Peter 2:9). But most importantly, the people received the Torah, which simply means teachings, God’s Word; for Moses had written down the first five books of the Bible and at that time God gave the people the Temple and the priesthood. He had Moses build a tabernacle exactly like the one in heaven and through the Torah, He showed Israel how He wanted to be worshiped by giving them laws and regulations regarding worship and, of course, His Appointed Times which included the Sabbath, Passover, and Pentecost to mention a few. Romans 9:4 tells us that Israel received the adoption as sons, the glory, the covenants, the giving of the law, the service of God, and the promises. The Bible says, “You were once not a people but now you are the people of God.”

The Giving of the Holy Spirit

So now we fast forward to the days of Yeshua and His disciples and we find that Yeshua tells the people, before He ascends to heaven, to remain in Jerusalem until the promised Holy Spirit comes upon them. Not knowing when the promise would come, the people wait and they pray and prepare their hearts to receive the promise. Counting the Omer every day till Pentecost, the day arrives and they go to the temple for worship. Pentecost was one of the three pilgrimage feasts where all the men were required to go to Jerusalem to worship on that day, so Jerusalem was very crowded, for people from all over the Diaspora had come for the feast, just like the day of Passover when Yeshua died; all were there to see. The book of Acts tells us in Acts 2:2-4, “Suddenly there came a sound from heaven, as of a rushing mighty wind, and it filled the whole house where they were sitting. Then there appeared to them tongues of fire, distributing and resting on each of them. And they were all filled with the Holy Spirit and began to speak with other tongues (unknown languages) as the Spirit gave them utterance.”

On the day of Pentecost on Mt. Sinai, the Sages believed that God spoke the Ten commandments, or what is called the Decalogue, in 70 different languages, which represented the main languages of the world; and on the day of Pentecost when the tongues of fire came upon them, they also believe that God spoke and these were the tongues that the disciples were speaking, for Acts 2:5-11 continues to tell us that the crowd came together at the sound and everyone became confused, for they heard the disciples speaking, every one in his own language.

The crowd was amazed and wondered what the meaning of all this was, while others mocked them and said that they were all drunk. But Peter got up to address the crowd, for the Temple was filled with Jewish people from all over the Diaspora. So, what did Peter tell them? He did not say that Yeshua told them this would happen but Peter begins and says to the crowd, “We are not drunk as you would suppose, since it is only the third hour (9AM) of the day, but this is what was spoken by the prophet Joel: ‘And it shall come to pass in the last days,’ says God, ‘that I will pour out of My Spirit on all flesh; your sons and your daughters shall prophesy, your young men shall see visions, your old men shall dream dreams. And on My menservants and on My maidservants I will pour out My Spirit in those days; and they shall prophesy. I will show wonders in heaven above and signs in the earth beneath: blood and fire and vapor of smoke. The sun shall be turned into darkness, and the moon into blood, before the coming of the great and awesome day of the Lord. And it shall come to pass that whoever calls on the name of the Lord shall be saved” (Acts 2:15-21).

Then he speaks of Yeshua of Nazareth and how they crucified Him; he quotes David in Psalm 16, and finally he calls for repentance and three thousand Jewish people came to believe that day (Acts 2:22-42). Don’t you find this an odd message for the birth of a new church, a new religion? There was nothing about the old being old and the new being new. There was nothing about putting aside your Jewish practices, for the law has been fulfilled—nothing about any of that—but instead, a quote from the Hebraic Scriptures talking about Yeshua’s second coming and the great outpouring of the Holy Spirit in the latter days; and he ends his message with repentance, the same message that Yeshua preached: “Repent, for the Kingdom of God is at hand” (Matthew 4:17).

The Bible tells us that the outpouring of the Holy Spirit was a down payment, a pledge of things to come and that First Century Pentecost was the first fruits (Romans 8:23, James 1:18) of that down payment. We now have been sealed (Ephesians 1:13-14) and those who live a life of walking in the Spirit are the true children of God. Romans 8:14 says that Yeshua was the Word made flesh. He came to lay down His life so that we may have life, and that life is only in Him (John 14:6, 1 John 5:20). When He ascended into heaven, He promised the coming of the Holy Spirit, His Spirit, for God is ONE: One Word, One Body, One Spirit (1 Corinthians 12:12-13); and that promise was given at Mt. Sinai to a people, a nation; and now the mystery of all of this has come to pass that the dividing wall has been taken down through the death of Yeshua (Ephesians 2:11-22) so that we Gentiles may be grafted into this people (Romans 11:17), this nation, the people of God through the shed blood of Yeshua when we come to believe.

For the temple that was erected from the copy seen in heaven has now become us, for we are now the temple of the Holy Spirit (1 Corinthians 3:16, 6:19), living to make holy sacrifices as a royal priesthood, coming before God with our lives and our prayers and our worship which is our service (Romans 12:1, 1 Peter 8:5). This is what needs to be celebrated on Pentecost. For the Jewish people had already become the church, or as you would say, the Ekklesia, the congregation of God. Thank God that He loved us so much that He sent His only begotten Son so that whoever believes in Him may have eternal life (John 3:16).

Talk about birthday gifts! We have passed over from death to life, from darkness to light. We have been washed in the blood of the Lamb and robed in His righteousness and the veil has been broken so we can now approach God through Yeshua’s sacrifice; and all of this was done at Passover, and now He has given us His Holy Spirit as a pledge to lead us in all truth by keeping His Word and to help us to walk with Him on that path that leads to life. Now, that is worth celebrating the Feast of Pentecost!

One thought on "Pentecost: The Birthday of the Church"

Therefore, prepare your minds for action, keep sober in spirit, fix your hope completely on the grace to be brought to you at the revelation of Yeshua. — 1 Peter 1:13