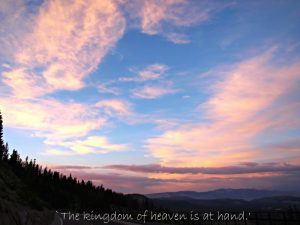 When we speak of the Kingdom, so often we think of it in imaginary thinking. It is a concept that just does not seem real to us and yet the Kingdom is right before us. We want to look at the Kingdom so that we can make it a part of our lives right here and now. Yeshua, right from the beginning of His ministry, began with this message as we see in Matthew 4:17, “ From that time on Yeshua began to preach, ‘Repent, for the kingdom of heaven has come near.’”

This message of the Kingdom was not for just one day, but Yeshua spoke often about it, and so did His disciples, and even John the Baptist spoke of it before Yeshua. We can not even begin to live in the Kingdom unless we repent of our sins.

So let’s take a closer look at the Kingdom, and when we are done we will have a picture of the Kingdom in our own lives right here and right now.

Matthew 13:24-30, “The kingdom of heaven is like a man who sowed good seed in his field. But while his men were sleeping, his enemy came and sowed weeds among the wheat, and left.  And when the wheat sprouted and produced grain, then the weeds also became evident.  And the slaves of the landowner came and said to him, ‘Sir, did you not sow good seed in your field? How then does it have weeds?’ And he said to them, ‘An enemy has done this!’ The slaves said to him, ‘Do you want us, then, to go and gather them up?’  But he said, ‘No; while you are gathering up the weeds, you may uproot the wheat with them.  Allow both to grow together until the harvest; and at the time of the harvest I will say to the reapers, “First gather up the weeds and bind them in bundles to burn them; but gather the wheat into my barn.”

When God created the world, He called it good, but as we know, the devil came and corrupted it. But one day God will separate the wheat from the chaff, and that does not necessarily mean the believer from the unbeliever, but those who produced fruit and those who did not.

Matthew 13:31-32, “The Kingdom of heaven is like a mustard seed, which a person took and sowed in his field;  and this is smaller than all the other seeds, but when it is fully grown, it is larger than the garden plants and becomes a tree, so that the birds of the sky come and nest in its branches.”

Matthew 17:20b tells us this, “For truly I say to you, if you have faith the size of a mustard seed, you will say to this mountain, ‘Move from here to there,’ and it will move; and nothing will be impossible for you.”

We see that the Kingdom is a kingdom of faith.

Matthew 13:33,  “The Kingdom of Heaven is like yeast that a woman took and mixed with a bushel of flour, then waited until the whole batch of dough rose.”

We are the yeast and we must grow the Kingdom.

Matthew 13:44, “The kingdom of heaven is like a treasure hidden in the field, which a man found and hid again; and from joy over it he goes and sells everything that he has, and buys that field.”

Matthew 13:45:46, “Again, the kingdom of heaven is like a merchant seeking fine pearls, and upon finding one pearl of great value, he went and sold everything that he had and bought it.”

Matthew 19:29, “And everyone who has left houses or brothers or sisters or father or mother or children or farms on account of My name, will receive many times as much, and will inherit eternal life.”

When you truly find the Kingdom, your response can only be that you found a great treasure that causes you to leave everything behind.

Matthew 13:47-52, “Again, the kingdom of heaven is like a dragnet that was cast into the sea and gathered fish of every kind;  and when it was filled, they pulled it up on the beach; and they sat down and gathered the good fish into containers, but the bad they threw away.  So it will be at the end of the age: the angels will come forth and remove the wicked from among the righteous,  and they will throw them into the furnace of fire; in that place there will be weeping and gnashing of teeth. Have you understood all these things? They said to Him, “Yes.” And Yeshua said to them, “Therefore every teacher  who has become a disciple of the kingdom of heaven is like a head of a household, who brings out of his treasure new things and old.”

John 3:3, “Yeshua responded and said to him, “Truly, truly, I say to you, unless someone is born again he cannot see the kingdom of God.”

Yeshua tells us what the kingdom is like but there is even more than this to a kingdom. Every kingdom must have a king. 1 Timothy 6:13-16 tells us,

“I direct you in the presence of God, who gives life to all things, and of Messiah Yeshua, who testified the good confession before Pontius Pilate,  that you keep the commandment without fault or reproach until the appearing of our Lord  Messiah Yeshua,  which He will bring about at the proper time—He who is the blessed and only Sovereign, the King of kings and Lord of lords,  who alone possesses immortality and dwells in unapproachable light, whom no one has seen or can see. To Him be honor and eternal dominion! Amen.”

Every Kingdom has to have laws and our King also has laws, they are called the Ten Commandments.

Hebrews 8:10 says this, “This is the covenant I will establish with the people of Israel  after that time, declares the Lord. I will put my laws in their minds  and write them on their hearts. I will be their God,  and they will be my people.”

Every Kingdom has its own banner..remember the song, “Lift high the Lord our Banner”?  Yeshua is our banner for it is by His name that the enemy flees. It is His name that we want written on our foreheads.

Revelation 22:3-4 tells us,  “There will no longer be any curse; and the throne of God and of the Lamb will be in it, and His bond-servants will serve Him;  they will see His face, and His name will be on their foreheads.”

One day we will feast at His table as Song of Solomon 2:4 tells us “He has brought me to His banquet hall, and His banner over me is love.”

And again in Revelation 19: 7,  “Let us rejoice and exult and give Him the glory, for the marriage of the Lamb has come,  and His Bride has made herself ready; it was granted her to clothe herself  with fine linen, bright and pure”—for the fine linen is the righteous deeds of the saints.”

Because our Father is a king, we are a royal priesthood as 1 Peter 2:9 tells us,  “But you are a chosen people, a royal priesthood, a holy nation, a people for God’s own possession, so that you may proclaim the excellencies of Him who has called you out of darkness into His marvelous light;  for you once were not a people, but now you are the people of God; you had not received mercy, but now you have received mercy.” And so we must everyday minister at the altar bringing our sacrifice of praise, Hebrews 13:15, “Through Him then, let’s continually offer up a sacrifice of praise to God, that is, the fruit of lips praising His name.” And laying our lives upon the altar, Romans 12:1, “Therefore I urge you, brothers and sisters, by the mercies of God, to present your bodies as a living and holy sacrifice, acceptable to God, which is your spiritual service of worship.”

People from all over will come as Isaiah 60:5 tells us this: “Then you will see and be radiant, and your heart will thrill and rejoice; because the abundance of the sea will be turned to you, the wealth of the nations will come to you.”

If this is how God feels about His Appointed Times, maybe we should be celebrating them now if we are truly in the Kingdom.  So is the Kingdom here with us? Luke 17:20-21 tells us,  “The  Pharisees asked Yeshua when the Kingdom of God would come. “The Kingdom of God,” He answered, “does not come with visible signs;  nor will people be able to say, ‘Look! Here it is!’ or, ‘Over there!’ Because, you see, the Kingdom of God is among you.”

You see every moment that you live out the Word of God, serving our Lord and Savior, being that royal priesthood, fighting the good fight for the Kingdom and as you take hold of the Kingdom inwardly and outwardly, you are in God’s Kingdom.

Our citizenship is in the kingdom. And we eagerly await our Savior, our King, the Lord Messiah Yeshua.

What has Happened to Virtues