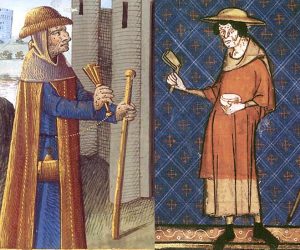 Leprosy is something which we see talked about in Scripture, but it is not something which we generally think about or consider in our society today. Although the purification rites of a leper are not something one might see as something necessarily important to study, there are some things on this subject which do have lessons to teach us. Since two full chapters in Leviticus are devoted to the treatment of those who are afflicted with this impairment, we are going to take a closer look.

When the Bible speaks of leprosy, you may have noticed in the footnotes that leprosy does not necessarily mean actual leprosy as we understand the disease today. Many translations therefore attempt to avoid any confusion by simply replacing the word “leprosy” with “skin disease.” In today’s medical understanding, leprosy is a specific bacterial condition known also as Hansen’s Disease, whereas in the Hebrew the word for leprosy, tzaraat, apparently means a different condition both in its symptoms and in that it could affect not only people, but also houses or articles of clothing (Leviticus 13:47-49, 14:34-35).

The disease of tzaraat was considered a punishment for loose lips, such as slander or gossip. This interpretation finds a suitable example in the story of Miriam and Aaron: “Then Miriam and Aaron spoke against Moses because of the Cushite woman whom he had married (for he had married a Cushite woman); and they said, ‘Has the LORD indeed spoken only through Moses? Has He not spoken through us as well?’ And the LORD heard it…. But when the cloud had withdrawn from over the tent, behold, Miriam was leprous, as white as snow. As Aaron turned toward Miriam, behold, she was leprous” (Numbers 12:1-2, 10). Because of the words which were spoken against Moses, God punished Miriam with leprosy. Another reason for this belief about the correlation between leprosy and sins of speech is from a bit of wordplay: metzorah is the Hebrew word for “leper,” and motzi shem ra means a person guilty of slander/libel.

This understanding may help put a new lens on a certain passage in the gospel of Mark. A leper came to Yeshua (Jesus) and asked to be healed. Yeshua is filled with compassion and lays His hands on the man: “Immediately the leprosy left him and he was cleansed. And He sternly warned him and immediately sent him away, and He said to him, ‘See that you say nothing to anyone…’ But he went out and began to proclaim it freely and to spread the news around” (Mark 1:42-45). Although Yeshua had healed this man’s leprosy, he did not obey Yeshua. Instead, he went around and spoke to everyone what Yeshua had explicitly told him not to. Is it possible that the reason he had gotten leprosy in the first place is because this man had trouble controlling his tongue?

Continuing this line of thought, the sages interpreted the treatment for leprosy as reflecting the nature of its cause: “He shall live alone; his dwelling shall be outside the camp” (Leviticus 14:26). Since the afflicted person apparently has trouble controlling their tongue, during the period which they are afflicted they are to be separated from others. This also serves to teach us that it is important to separate oneself from a person who is loose in their talk. By listening to their words, you become a party to their sin. You also put yourself in danger of becoming like them or of acquiring unrighteous attitudes because of their words (Isaiah 33:15).

Many warnings are given throughout Scripture about sinful speech. We are told not to even keep company with those who might lead us astray by listening to their words, nor to “sit in the seat of scoffers” (Psalm 1:1). James puts it succinctly when he says, “If anyone thinks himself to be religious, and yet does not bridle his tongue but deceives his own heart, this man’s religion is worthless” (James 1:26). While today we may not have to worry about getting leprosy, the sins associated with speech are something we must remain vigilant against. Simply paying attention to what we say will not be enough to truly purify our speech: “The good man out of the good treasure of his heart brings forth what is good; and the evil man out of the evil treasure brings forth what is evil; for his mouth speaks from that which fills his heart” (Luke 6:45). This is why James was able to so confidently state that one whose speech is impure is deceiving himself. The issue is not so much the words themselves, but the fact that these words can only come out of a heart which is equal in impurity to such speech. “Draw near to God and He will draw near to you. Cleanse your hands, you sinners; and purify your hearts, you double-minded” (James 4:6).

If we find ourselves being a party to impure or destructive speech, let us not only seek to separate ourselves from this in the flesh, but through the power of the Holy Spirit, purify our hearts from which all impurity arises.

Pekudei: Making a Home for God