Sukkot Sabbath: Going Up to Jerusalem 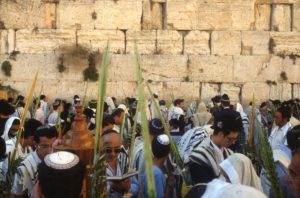 Three times a year, at set times, the men of Israel were commanded to make pilgrimage to the place where God would put His name. This place was Jerusalem, and particularly, the temple. The three times for pilgrimage corresponded to three of the Appointed Times which God commanded to be observed: Passover, Shavuot (Pentecost), and Sukkot (The Feast of Tabernacles). The current portion is taking place during the feast of Sukkot, so that is where we will here focus our attention.

God instructs the people of Israel, saying, “Three times a year all your males are to appear before the Lord God, the God of Israel. For I will drive out nations before you and enlarge your borders, and no man shall covet your land when you go up three times a year to appear before the Lord your God” (Exodus 34:23-24). Because God was going to expand the size of the land of Israel and people would be living far away from Jerusalem, God made it so that three times per year the people should come up to the temple to worship God and bring sacrifices. This would serve to remind the people who it was that they served, and that the reason they were able to prosper and enjoy the land was because of God’s favor. It would also bring the entire nation of Israel together to remind them that they were one nation, one family, worshipping the one true God.

Deuteronomy records that the Feast of Tabernacles is one of these times when the men of Israel are to come up to Jerusalem, and it includes some additional instructions: “Three times in a year all your males shall appear before the LORD your God in the place which He chooses, at the Feast of Unleavened Bread and at the Feast of Weeks and at the Feast of Booths (Tabernacles), and they shall not appear before the LORD empty-handed” (Deuteronomy 16:16). The Feast of Tabernacles takes place during the time of harvest in the land of Israel, and so the people were to bring the fruits of their harvest to give to God. The land was not to be considered their own, but God was letting them use it, and so out of thankfulness they were to give the first portion to God in addition to any other offerings which the individual desired to give.

Today, the command to appear before the Lord is not possible to fulfill, because there is not a temple service taking place in Jerusalem. The reason the command was made was so that the men of Israel would come up to the temple and offer sacrifices, but since there is no priesthood and no temple, these sacrifices cannot be made, and thus the command to make pilgrimage is not able to be fulfilled.

The prophet Zechariah, however, prophesies of a day when not only Israel, but all of the nations on earth will make pilgrimage to Jerusalem for the Feast of Tabernacles: “Then it will come about that any who are left of all the nations that went against Jerusalem will go up from year to year to worship the King, the LORD of hosts, and to celebrate the Feast of Booths. And it will be that whichever of the families of the earth does not go up to Jerusalem to worship the King, the LORD of hosts, there will be no rain on them” (Zechariah 14:16-17). So we see that people from every nation will be celebrating the Feast of Tabernacles. Of that day it is also said, “And many peoples will come and say, ‘Come, let us go up to the mountain of the LORD, to the house of the God of Jacob; that He may teach us concerning His ways and that we may walk in His paths.’ For the law will go forth from Zion and the word of the LORD from Jerusalem. And He will judge between the nations, and will render decisions for many peoples; and they will hammer their swords into plowshares and their spears into pruning hooks. Nation will not lift up sword against nation, and never again will they learn war” (Isaiah 2:3-4).

This is the fulfillment which the Feast of Tabernacles looks forward to. As the final feast of the year according to the religious calendar, it represents the Kingdom. It is a time of great joy and celebration, and in fact God commands that this time is to be rejoiced in: “And you shall rejoice in your feast, you and your son and your daughter and your male and female servants and the Levite and the stranger and the orphan and the widow who are in your towns” (Deuteronomy 16:14). Our joy will reach its ultimate fulfillment when God Himself will be our tabernacle in the New Jerusalem: “And I heard a loud voice from the throne, saying, ‘Behold, the tabernacle of God is among men, and He will dwell among them, and they shall be His people, and God Himself will be among them'” (Revelation 21:3).

If we will be celebrating the Feast of Tabernacles in the Kingdom of God, then why should we wait to experience the joy and power of God in this Appointed Time? It is a time which God has set aside for expressing our joy in Him and giving thanks for all that He has done for us and given to us, especially His own Son, Yeshua (Jesus) our Messiah. Let us celebrate the Feast of Tabernacles and rejoice as we look toward the day when Yeshua will return and draw us to Himself, and He will tabernacle among us for eternity.

Nitzavim: Circumcision of the Heart

Yom Kippur: The Day of Atonement