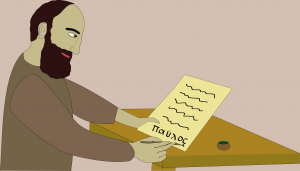 Paul is the number one person who people quote when talking about Christianity. This is likely due to the fact that nearly half of the New Testament is attributed to his authorship. Although this is the case, Paul is probably the most misunderstood figure in the Scriptures. Even his own contemporaries found his words sometimes difficult to understand (2 Peter 3:15-18). Today, in addition to this we have the obstacle of time which separates us from him. For this reason it is essential that we understand who Paul was so we can understand his teachings.

Paul, also known as Saul, was born in the city of Tarsus (Acts 21:39, 22:3). This city was in the Roman-controlled region of Cilicia, which is located in what is now southern Turkey. This is where he was born and spent some of his childhood. Here he would have been immersed in the culture and education that Rome had to offer, which itself was heavily reliant upon the cultural forces of Hellenism. Although this, the Greek side of Paul, is the one most often emphasized today, there is another side to Paul, one which was closer to his own worldview than that of the Romans and Greeks. While Paul grew up in the midst of a culture that was fixated on the world, he was raised in a home that was devoted to God. Philippians 3:5 gives us a brief look into Paul’s Jewish background: “Circumcised the eighth day, of the nation of Israel, of the tribe of Benjamin, a Hebrew of Hebrews; as to the Law, a Pharisee.” Let’s break this verse down so we can see who Paul was. The first point here is that Paul was circumcised on the eighth day. From this we know that not only was Paul Jewish, but his parents were as well, and they made sure to follow the command in regard to circumcision (Genesis 17:9-14). Circumcision was the sign of the covenant that God made with the children of Israel, and so it was important that he would be circumcised to keep in obedience with this covenant. The second identifying point in this verse is that he was “of the nation of Israel, of the tribe of Benjamin.” Paul’s ancestors had not been converts either, but were born into Israel. The tribe of Benjamin had given Israel their first king, who was Saul’s namesake (1 Samuel 9:21). It was the smallest of the tribes, yet it along with Judah remained faithful to the house of David when the other ten tribes broke away.

Paul continues to title himself “a Hebrew of Hebrews.” This is a summary of all of the above and an assertion that he was a Hebrew who lived and believed like a Hebrew. Despite living in a Hellenistic atmosphere, Paul affirms that he did not compromise his Jewish religious expression at any point, but that he is in fact more Hebrew than the others who claim to be so, but are not (Philippians 3:2-3). The last point we are going to look at in this passage is that in regard to his understanding of the Torah, he is a Pharisee. We want to look a little closer at what this means.

Paul’s alignment with the Pharisean beliefs was not only based on his own conclusions, but these beliefs were passed on by his father as Paul grew up in Tarsus before ever setting foot in Jerusalem: “Brethren, I am a Pharisee, a son of Pharisees” (Acts 23:6). He did go to Jerusalem to continue his education in regard to the intricacies of the faith, showing that his desire was to pursue an active role in religious leadership (Acts 22:3). By the time he was old enough to continue his religious education in Jerusalem, he already had a head start on his peers (Galatians 1:14). The system of education he would have been immersed in was discipleship. In that system, a prominent religious figure would raise up disciples, who would completely devote themselves to emulating their teacher in every manner of life. Acts 22:3 informs us that Paul was a disciple of Gamaliel, who is shown in the Bible to be sympathetic in judgment (Acts 5:34-35, 38-39), and in Christian tradition it is said that Gamaliel secretly held a belief in Yeshua (Jesus). As a Pharisee, Paul would have held to certain beliefs, some of which we have borrowed through Paul and the disciples as recorded in the Bible. Some of these beliefs which the Pharisees held are the resurrection from the dead (1 Corinthians 15:12-18), the existence of the soul/afterlife (1 Thessalonians 5:23), the validity of Scripture for personal application (2 Timothy 3:16), and the importance of tradition (1 Corinthians 11:2, 2 Thessalonians 2:15). While today we take these truths for granted, the reason we adhere to these beliefs within Christianity is because of the Scriptural interpretation of the Pharisees rather than that of the Sadducees or the Essenes.

In Christianity today, we tend to only view Pharisees in a negative light because of the rebukes we see Yeshua make against them in the Gospels (Luke 11:42-44). It is also true, however, that Yeshua spent lots of time with Pharisees (Luke 7:36, 11:37) and as we have seen, passed on many theological views to His apostles which were similar to the views of the Pharisees. Obviously if the entirety of the Pharisaic belief system were completely in line with those of the apostles, then there would have been no need for the sect of the Way to be formed (Acts 24:14). However, the distinction between the practices of the Way and the Pharisees were not as clearcut as we may believe today, and initially followers of Yeshua were comfortable within the rabbinic system and the synagogue (Matthew 23:2-3, Acts 13:14). The biggest difference between the Way and the rest of Judaism was obviously the acceptance of Yeshua as the expected Messiah, but the difference which caused the most division was the eagerness of the believers in Yeshua to accept Gentiles into the community. Increased persecution led the Christian sect to separate from Judaism, and as time went on and more Gentiles began to come to belief in Yeshua, Greek and pagan ideas became syncretized into this belief, which caused further separation between the Gentile and Jewish believers.

Paul, however, retained his identity as a Pharisee. Returning to Philippians 3, however, we see that he did not rely on his heritage or his sectarian alignment for any sort of justification: “I consider everything a loss because of the surpassing worth of knowing Messiah Yeshua my Lord, for whose sake I have lost all things” (verse 8). Does this mean that Paul forsook his heritage and became like a Gentile? No, for he recognized that being Jewish did have value, although not as a means of being justified in the sight of God (Romans 3:1-2). He recognized that the Gentiles only received the blessings of Israel because of the grace God had in His election of the people of Israel, who we as Christians become grafted into when we put our faith in Yeshua the Messiah of Israel (Romans 11:17-18).

Most people are willing to accept that Paul was Jewish, but they say that after his “conversion” on the Road to Damascus in Acts 9, all of that changed, signified by the changing of his name from Saul to Paul. A closer examination of this passage, however, reveals that he is not referred to as Paul until Acts 13, and no change in his behavior in respect to his Torah-observance is ever recorded. Using the term “conversion” in the passage title as most translations do, a word which is not found in this passage, also frames it in a way that it causes the reader to assume Paul converted from Judaism to something completely different. While it is true that Paul had a life-changing experience with Yeshua on that road, this did not negate his continued Torah-observance. This is evident in the description of Ananias, the man who was sent to Paul to heal him after he is blinded, as “a man who was devout by the standard of the Law, and well spoken of by all the Jews who lived there” (Acts 22:12). It is reasonable to assume that Ananias was a typical believer at that time, one who would never find any reason to believe that following Yeshua and living according to the Torah were opposed to each other. Paul repeatedly defends himself by saying that he has neither taught nor acted in any way opposed to the Jewish people, the Temple, or the Torah and traditions (Acts 23:6, 24:14, 25:8, 28:17). In fact, those who were making false accusations about him tried to frame him as one who taught that the Torah was no longer important or binding (Acts 21:20-21, 24). For believers today, the largest hurdle to accepting this is most likely some of the phrases which Paul uses in his epistles when he discusses the Torah and circumcision. A clearer interpretation and understanding of these passages and the cultural context they were written in shows that there is no actual discrepancy between Torah-observance and following Yeshua. Paul’s letters were mainly written to Gentile believers, and so his main goal was to teach them that they did not need to become circumcised, that is, physically converted to Judaism, in order to be grafted into and receive the blessings of Israel, including the hope of salvation through faith in Yeshua the Messiah.

So why don’t we recognize the Jewish Paul today? It is partially that we simply don’t realize that his teachings were from a Jewish perspective because they were teachings that we carried into Christianity. We are generally not taught that Christianity in its earliest stages was a sect of Judaism known variously as the Way or the Nazarenes. Christianity as we know it today has been influenced by many different cultures and perspectives, far removed from the Mediterranean worldview which it was written within. We are so used to thinking of Paul as one who supposedly taught against Judaism that it is difficult to change that frame of mind.

Another reason for the apparent discrepancy is that Paul was the apostle to the Gentiles. The writings which we have in the Bible are letters to majority Gentile communities, and therefore his goal was to be relatable to them and give them instructions that were applicable to them (1 Corinthians 9:20-21). This doesn’t mean that he himself behaved in any way opposed to Judaism or advocated a rejection of Torah, but he was bringing the message for those communities that they needed to hear at that particular time, which was mainly that Gentiles do not need to undergo a ceremonial conversion to Judaism in order to be spiritually grafted into Israel.

You can find more topical teachings on Paul’s letters in our other brochures on Paul.

It’s a Matter of Night and Day