The Jerusalem council recorded in Acts 15 is a crucial moment in the history of Christianity. Unfortunately, this passage is generally misunderstood. Most people today believe the decision made here by the council declares that Gentiles should not follow the Torah. We are going to go through this chapter to find out if this is correct.

Who Can Be Saved?

At the beginning of Yeshua’s (Jesus’) ministry, the overwhelming majority of His followers were Jewish (Matthew 10:5-6). After more and more Gentiles began coming to belief in Yeshua and attempting to worship alongside the Jewish believers (Acts 13:44-45), the question of how they were to relate to God and the people of Israel became necessary to answer. One of the beliefs that was gaining popularity was that the believing Gentiles must be circumcised and observe the Torah in order to be saved. (Acts 15:1, 5). Circumcision and Torah-observance were both terms used to symbolize conversion to Judaism. So why would these believers think Gentiles needed to convert to Judaism to be saved? To understand this, we must learn about the common ideas about salvation in those days.

As Christians today, we understand salvation to mean that when we die, we will not be subject to eternal punishment in hell, but will spend eternity in heaven. This opportunity is afforded to anyone who accepts Yeshua and His atoning sacrifice as a free gift. But during the early days of the apostles, Judaism purported that salvation was based on the covenant between God and Israel (Genesis 17:14, Isaiah 45:17, 60:21). Some Jews, the sect known as the Sadducees, did not believe in an afterlife, so they did not see anything they needed to be saved from (Mark 12:18). The Pharisees, however, saw hints and glimpses in the Scriptures (Acts 23:8), and understood that death was not the end of individual existence (Proverbs 15:24, Isaiah 26:19, Daniel 12:2). Because of the lack of explicit details about the afterlife recorded in the Old Testament, there were many explanations of what happens after death and in the final judgment.

Contrary to popular belief, Jews do not believe that eternal life is earned by keeping the commandments perfectly. The majority opinion is summed up in the words of the Talmud: “All Israel have a share in the World to Come.” In other words, the belief at that time was that salvation is granted by God only to Israel, and so Gentiles must become Jewish in order to have a relationship with God. While this was the idea about Gentiles during the time of Yeshua, eventually the idea developed that those of the nations who act in accordance with righteousness will receive eternal reward. According to this idea, Gentiles are saved by adherence to the covenant God established with Noah. Noah existed before the Jewish people, and so the writers of the Talmud say that the covenant God made with Noah is for all of mankind (Genesis 9:9, 18-19). They developed a list of seven rules which go along with this covenant: 1. Do not worship false gods, 2. Do not curse God, 3. Do not murder, 4. Do not commit sexual immorality, 5. Do not steal, 6. Do not eat a live animal/meat with blood, and 7. Establish courts of justice. The first six laws were derived from various passages in Scripture where God shows certain expectations of mankind in general, and the last is established to uphold the other six.

Some of the Jewish followers of Yeshua adopted the first view of salvation, saying that Gentiles needed to join to Israel by becoming circumcised and converting to Judaism in order to share in the blessings associated with the covenant, including the hope of salvation. Peter and some of the other apostles, however, saw that God had a different plan for the Gentiles. Peter explains in Acts 15:7-11 that God had shown His acceptance of the Gentiles when He gave them the Holy Spirit (Acts 10:34-35, 44-45, 11:15-18). If God did this, showing that their hearts had been circumcised, then Peter argued that Gentiles did not need to be physically converted in order to receive the other gifts of God, including salvation. Furthermore, the Torah speaks of Jewish and Gentile believers worshipping God together (Deuteronomy 31:11-12, Isaiah 56:6-7, Acts 15:17). In other words, Gentiles are joined to Israel not through circumcision of the flesh, but through circumcision of the heart.

But where does this place Gentiles in relation to the Torah?As Peter is explaining all of this, he asks in verse 10, “Why do you put God to the test by placing upon the neck of the disciples a yoke which neither our fathers nor we have been able to bear?” Some have asserted that this yoke is the Torah, since Torah-observance would be required for someone who converted to Judaism. Is Peter really implying that since believers are justified by faith in Yeshua that we are not required to obey God’s commandments because they are a burden?

According to Scripture, the Torah is not a burden (Deuteronomy 30:11-14, James 1:25, 1 John 5:3-4). However, some of the traditions, or oral commandments, are indeed called a burden in Scripture (Mark 7:8, Luke 11:46). Jews have an obligation to keep both the written Torah and oral traditions in order to remain in the covenant (Deuteronomy 17:9-11). These oral commandments are decisions that the religious leaders and judges have made throughout the years in order to determine how a particular commandment is correctly lived out. While this was the underlying purpose of the oral commandments, sometimes the religious councils abused their authority. Yeshua, throughout His ministry, speaks against some of these extra commandments, which often were extremely strict or ran against the spirit of the Torah. Despite this, He instructs His disciples to follow these traditions in Matthew 23:1-4, because the religious leaders derive their authority from God.

The burden Peter is advocating against is the full weight of covenantal obligation, especially the oral commandments. He was saying that the new Gentiles did not need to convert in order to be in right-standing before God, and that if they did convert, then the entirety of the covenantal obligations would rest upon their shoulders.

In opposition to the multitude of manmade commandments in traditional Judaism, the Jerusalem council decides on four rules which will be binding upon Gentiles in verses 19-20: “Therefore it is my judgment that we do not trouble those who are turning to God from among the Gentiles, but that we write to them that they abstain (1) from things contaminated by idols and (2) from fornication and (3) from what is strangled and (4) from blood.” He did not stop there, but goes on to explain in verse 21, “For Moses from ancient generations has in every city those who preach him, since he is read in the synagogues every Sabbath.” During the time of the Jerusalem council, Gentile God-fearers and Jewish believers in Yeshua still went to the synagogue every Sabbath and worshiped alongside regular Jews who were not believers (Acts 14:1, 18:4). This was the way it was expected to be, and the council did not aim to change that. So what was the reason for these four rules in particular? Obviously these were not the only commands that Gentiles were supposed to follow, so what was their purpose? The answer is that James and the Jerusalem council basically advocated observance of the laws that had been given to mankind from the beginning, like what we saw with the Noahide commands. These four commands also had the problem of idolatry in mind: consuming food offered to idols, temple prostitution, and participation in sacrificial rituals that were all associated with paganism. Notice that none of these commands directly come out and forbid idolatry, since that was already a commandment in the Torah (Exodus 20:3). Since the Jews had laws against associating with idolaters, these four rules would prove to Jewish believers that the Gentile believers had indeed forsaken their past pagan lifestyle so that they would be able to come together in fellowship. These four commands established a basic level of Torah-observance that allowed the Gentile to assimilate into the community of believers where he would begin to learn more about his role as a Gentile now grafted into the body of Israel.

In conclusion, we have seen that this ruling solidified the fact that Gentiles do not need to become Jewish to be grafted into Israel. The prophets speak of Jews and Gentiles worshipping together, and so it is necessary for Gentiles to retain their nationality. Certain commandments were placed on their shoulders initially to aid their acceptance into the Jewish community, commands which apply to all of mankind. These rules would allow Gentiles to participate in the synagogue and home fellowships, where they would learn more about Torah and the teachings of Yeshua. The four commands for Gentiles do not explicitly include Sabbath observance, but it was understood that they would be honoring the seventh day, instituted at the time of creation (Genesis 2:2-3), at least in part alongside the Jews in the synagogue. So what bearing does the decision from the Jerusalem council have on us today? Although we don’t have to worry about worshipping idols made of stone, idolatry is still rampant in our world. Anything that stands between us and God is an idol, and therefore even the appearance of such idolatry needs to be eliminated from our lives. Sexual immorality was forbidden, and today we should guard our hearts by not even watching programs or movies that promote such things. Eating meat which came from a strangled animal and blood are no longer associated with pagan rituals, but are like a basic level of kosher observance, similar to that included in the Noahide laws. Just as the Gentiles rejoiced when they heard the report (Acts 15:31), so too we should rejoice that we have been grafted into Israel as we seek to grow ever-closer in our walk with God.

If I must boast, I will boast of the things that show my weakness. — 2 Corinthians 11:30 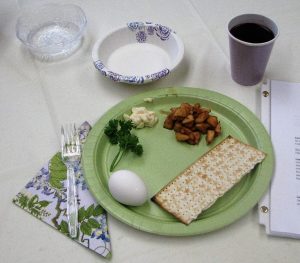