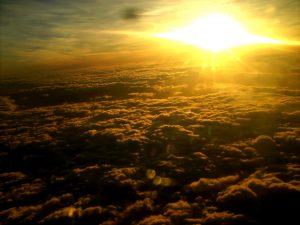 In today’s world, we live at such a fast pace and there are so many pressures placed upon us that we don’t really have time to think about what is going on around us. The days go by so fast that we have such little time, and we neglect our spiritual selves; so we walk in our darkness, we stumble and fall and many times we don’t pick ourselves up, but we stay in our fallen condition. We feel that God is not with us, or doesn’t even care because if He did, we would not have such pressure and problems to deal with. But God so loved us that He made a way for us in the darkness to walk in the light. Let’s take a closer look.

“In the beginning God created the heavens and the earth. And the earth was formless and void, and darkness was over the surface of the deep; and the Spirit of God was moving over the surface of the waters. Then God said, ‘Let there be light,’ and there was light” (Genesis 1:1-3). This light was not the light of the sun or the moon or the stars, but this light was the light of His kingdom. God separated His kingdom from the kingdom of darkness for God tells us that He is light and there is no darkness in Him.

So after the fall of man, which put him in spiritual darkness, God, in His great love for us, sent His light to lead us to the path which leads to Him. God led Israel with the pillar of cloud by day and the pillar of fire by night in the wilderness, and brought them to His mountain where He gave them His Word, the Torah, His teachings, His light. The Psalmist writes in Psalm 119:105, “Thy word is a lamp to my feet, and a light to my path.”

Psalm 119:129-130: “Thy testimonies are wonderful; therefore my soul observes them. The unfolding of thy words gives light; it gives understanding to the simple.”

Then God instructed Israel to build an exact replica of the tabernacle in heaven and in that tabernacle was the golden candlestick which represented the light of His word. It gave off its light continually and the flames were never to go out. This light of God, which was His Word, then became flesh; and He showed us what God looks like and how we too can live and be light: “In the beginning was the Word, and the Word was with God, and the Word was God. He was in the beginning with God. All things came into being by Him and apart from Him nothing came into being. In Him was life, and that life was the light of men. And the light shines in the darkness, and the darkness did not comprehend it” (John 1:1-5).

When asked if he was the Messiah, John the Baptist replied, “He was not the light, but came to bear witness of the light. There was the true light which, coming into the world, enlightens every man. He was in the world, and the world was made through Him, and the world did not know Him. He came to His own and those who were His own did not receive Him. But as many as received Him, to them He gave the right to become children of God, even to those who believe in His name” (John 1:8-12).

So the Word became flesh and dwelt among man, and His name was Yeshua (Jesus), which means Salvation. Yeshua Himself testified that He was the Light of the world; and everyone who follows Him will not walk in the darkness, but shall have the light of life (John 8:12). The darkness of this world and the pressures and cares of life keep us from drawing near to God’s light. In fact, we tend to run from the light to stay in our ways. Paul tells us in 2 Corinthians 4:4, “This world has blinded the minds of the unbelieving, that they might not see the light of the gospel of the glory of Messiah, who is the image of God.”

Again, Paul tells the Ephesians in chapter 5:8-11, “For this you know for certain; that no immoral or impure person, or covetous man, who is an idolater, has an inheritance in the Kingdom of God. Let no one deceive you with empty words, for because of these things the wrath of God comes upon the sons of disobedience. Therefore do not be partakers with them; for you were formerly darkness but now you are light in the Lord; walk as children of light, for the fruit of light consists in all goodness and righteousness and truth, trying to learn what pleases the Lord. And do not participate in the unfruitful deeds of darkness, but instead even expose them.”

Maybe we have stepped out of the light, or maybe we have never walked in the Light of life. John tells us in 1 John 1:5-9, “And this is the message we have heard from Him and announce to you, that God is light, and in Him there is no darkness at all. If we say that we have fellowship with Him yet walk in the darkness, we lie and do not practice the truth; but if we walk in the light as He Himself is in the light, we have fellowship with one another, and the blood of Yeshua His Son cleanses us from all sin. If we say that we have no sin, we deceive ourselves, and the truth is not in us. If we confess our sins, He is faithful and righteous to forgive us of our sins and to cleanse us from all unrighteousness.”

Draw near to the Light today, pick up a Bible and begin to read it and live it. And you will see light, and that light will bring you life, and that life is for eternity.

Although Moses was one hundred and twenty years old when he died, his eye was not dim, nor his vigor abated. — Deuteronomy 34:7

Please pray for Banks, OR.