To Believe the Impossible 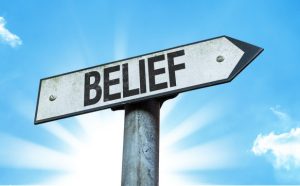 What does it mean to believe, and yet to believe the impossible? We want to take a closer look at this word.

The word believe in the Hebrew is aman, the verb in Greek is pisteuo, and from this word we get faith – pistis, assurance, firm conviction, from which we get the word faithfulness. When one believes, he puts his trust in something or someone, and that requires of him some sort of action. Abraham believed God, and it was reckoned to him as righteousness (Genesis 15:6). In other words, Abraham considered that what God had spoken to him was truth, and so Abraham believed. We see here that the word used for “to believe” in its truest sense, is as closely tied to salvation in the Hebrew Scriptures as it is in the Apostolic Scriptures (Galatians 3:6).

So the meaning of the word according to an entry on wikibooks is: “It is the act whereby a person lays hold of God’s resources, becomes obedient to what He has prescribed and putting aside all self interest and self-reliance, trusts Him completely. It is an unqualified surrender of the whole of one’s being in dependence upon Him. It is wholly trusting and relying upon Him for all things. It is not just mental assent to the facts and realities of truth, it must come from a deep inner conviction.”

The writer in Proverbs 3:5 tells us, “Trust in the Lord with all your heart, and do not lean on your own understanding,” which is a complete opposite to the one who relies on himself. Proverbs 28:26 tells us, “He who trusts in his own heart is a fool, but he who walks wisely will be delivered.” So we see that to believe is faith, and faith is righteousness, and righteousness is salvation. The writer of Hebrews tells it like this: “Now faith is the assurance of things hoped for, the conviction of things not seen,” (Hebrews 11:1).

Do we have the faith to believe the impossible? When life throws us a curve, when we derail and wander off the path, when we have done the unthinkable, do we have the faith to believe that God so loved me that He sent His only begotten Son, Yeshua, to die for my sins so that I could be forgiven and cleansed from all of my iniquities, transgressions, and sins, washed in the blood and totally redeemed by His blood? That I, when I confess my sins and repent, totally turnabout, now no longer need to carry the burden, the weight, of my sins? That Yeshua’s blood has the power to deliver me from all my guilt and shame? We may say “yes,” but remember this is, to the facts, not mental assent, but this must come from an inner conviction. When we are down and out, maybe due to a death, or a divorce, or a financial need to where life looks like the clouds have rolled in to stay, can we put our trust in the One who tells us that He will never leave us or forsake us? Can we follow the Master when He tells us to forsake all? Can we have the faith to walk in His footsteps? You see, to believe is an action word, and we must take action.

James writes in chapter 2:17-23, “In the same way, faith by itself, if it is not accompanied by action, is dead. But someone will say, ‘You have faith; I have deeds.’ Show me your faith without deeds, and I will show you my faith by my deeds. You believe that there is one God. Good! Even the demons believe that—and shudder. You foolish person, do you want evidence that faith without deeds is useless? Was not our father Abraham considered righteous for what he did when he offered his son Isaac on the altar? You see that his faith and his actions were working together, and his faith was made complete by what he did. And the scripture was fulfilled that says, ‘Abraham believed God, and it was credited to him as righteousness,’ and he was called God’s friend. You see that a person is considered righteous by what they do and not by faith alone.”

If we truly believe, if we truly have faith, if we truly trust God, then we must take our faith and trust and beliefs to a higher level and do the works that God has called us to. For Abraham to be willing to kill his only begotten son, he had to have the inner conviction, the assurance that God would raise him from the dead. That was his hope, that was his confidence, that was his faith, and he believed he had done what God had asked of him, and it was accredited to him as righteousness. Otherwise we are no different than the demons, for they believe God and shudder, but they do not do right by God. Do you believe the impossible? If you do, then you know that nothing is impossible with God, for Abraham knew that he could raise his son from the dead, and God did. Whatever is happening in your life, know this: that you can believe God’s word. He loves you, and He proved it by sending His Son to die for you, so now you can believe!

The Shadow of the Lord