Are You a Servant? 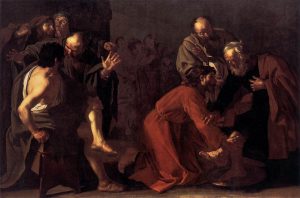 In Mark 10 we find a strange request from two of Yeshua’s disciples. James and John, the sons of Zebedee, ask to be granted the right to sit on either side of Yeshua when He comes into His glory. Now that seems a bit forward, don’t you think? Verse 34 tells us, “Then James and John, the sons of Zebedee, came to him. ‘Teacher,’ they said, ‘We want you to do for us whatever we ask.’” This does not only sound a bit forward, but also demanding.

Yeshua tells us to be humble in heart. Yeshua tells us in Luke 14:8-9, “When you are invited by someone to a wedding feast, do not take the place of honor, for someone more distinguished than you may have been invited by him, and he who invited you both will come and say to you, ‘Give your place to this person,’ and then you will begin with shame to take the lowest place. But when you are invited, go and sit in the lowest place, so that when your host comes he may say to you, ‘Friend, move up higher.’ Then you will be honored in the presence of all who sit at table with you.”

Matthew 20:25-30 tells us, “Yeshua called them together and said, ‘You know that the rulers of the Gentiles lord it over them, and their high officials exercise authority over them. Not so with you. Instead, whoever wants to become great among you must be your servant, and whoever wants to be first must be your slave— just as the Son of Man did not come to be served, but to serve, and to give His life as a ransom for many.’”

So the question is, are you a servant? Do you have a servant’s heart?

Well, first you must serve others. Philippians 2:3-4, “Do nothing out of selfish ambition or empty pride, but in humility consider others more important than yourselves. Each of you should look not only to your own interests, but also to the interests of others.”

Yeshua shows us what a real humble servant is, and how we should put others first in John 13:3-5, 12-15. Yeshua sets the example: “Yeshua knew that the Father had put all things under His power, and that He had come from God and was returning to God; so He got up from the meal, took off His outer clothing, and wrapped a towel around His waist. After that, He poured water into a basin and began to wash His disciples’ feet, drying them with the towel that was wrapped around Him. . . . So when He had washed their feet, and taken His garments and reclined at the table again, He said to them, ‘Do you know what I have done to you? You call Me Teacher and Lord; and you are right, for so I am. If I then, the Lord and the Teacher, washed your feet, you also ought to wash one another’s feet. For I gave you an example that you also should do as I did to you.’”

Galatians 5:13 tells us, “You, my brothers and sisters, were called to be free. But do not use your freedom to indulge the flesh; rather, serve one another humbly in love.”

Being a servant is not just waiting on someone. You can serve someone by meeting their needs, as Yeshua gives us the example in this parable: “Then the King will say to those on his right, ‘Come, you who are blessed by my Father; take your inheritance, the kingdom prepared for you since the creation of the world. For I was hungry and you gave Me something to eat, I was thirsty and you gave Me something to drink, I was a stranger and you invited Me in, I needed clothes and you clothed Me, I was sick and you looked after Me, I was in prison and you came to visit Me.’ Then the righteous will answer him, ‘Lord, when did we see you hungry and feed you, or thirsty and give you something to drink? When did we see you a stranger and invite you in, or needing clothes and clothe you? When did we see you sick or in prison and go to visit you?’ The King will reply, ‘Truly I tell you, whatever you did for one of the least of these brothers and sisters of mine, you did for me.’ (Matthew 25:34-45).

God will reward those who serve one another, those who put others first, those who serve with selfless ambition, as Romans 12:1-13 tells us, “Therefore I urge you, brethren, by the mercies of God, to present your bodies a living and holy sacrifice, acceptable to God, which is your spiritual service of worship. And do not be conformed to this world, but be transformed by the renewing of your mind, so that you may prove what the will of God is, that which is good and acceptable and perfect. For through the grace given to me I say to everyone among you not to think more highly of himself than he ought to think; but to think so as to have sound judgment, as God has allotted to each a measure of faith. For just as we have many members in one body and all the members do not have the same function, so we, who are many, are one body in Messiah, and individually members one of another. Since we have gifts that differ according to the grace given to us, each of us is to exercise them accordingly: if prophecy, according to the proportion of his faith; if service, in his serving; or he who teaches, in his teaching; or he who exhorts, in his exhortation; he who gives, with liberality; he who leads, with diligence; he who shows mercy, with cheerfulness. Let love be without hypocrisy. Abhor what is evil; cling to what is good. Be devoted to one another in brotherly love; give preference to one another in honor; not lagging behind in diligence, fervent in spirit, serving the Lord; rejoicing in hope, persevering in tribulation, devoted to prayer, contributing to the needs of the saints, practicing hospitality.”

So we see that a servant must be humble, putting others first, and that serving is a gift from God; but we must also serve the Lord, as Ephesians 6:7-9 tells us, “Serve wholeheartedly, as if you were serving the Lord, not people, because you know that the Lord will reward each one for whatever good they do, whether they are slave or free.” We must be fervent in our Spirit in serving the Lord.

Paul shows us how we must serve the Lord in Acts 20:19, “I served the Lord with great humility and with tears and in the midst of severe testing by the plots of my Jewish opponents.”

When we serve we are not serving on our own, but we are following the Lord, as Yeshua tells us in John 12:26, “If anyone serves Me, he must follow Me; and where I am, there My servant will be also; if anyone serves Me, the Father will honor him.”

Paul called himself a servant as we see in so many of his gospels and as we see here in Titus 1:1, “Paul, a bond-servant of God and an apostle of Messiah Yeshua, for the faith of those chosen of God and the knowledge of the truth which is according to godliness.”

James called himself a servant as we see in James 1:1, “James, a bond-servant of God and of the Lord Messiah Yeshua, to the twelve tribes who are dispersed abroad: Greetings.”

Peter called himself a servant in 2 Peter 1:1, “Simon Peter, a bond-servant and apostle of Messiah Yeshua, to those who have received a faith of the same kind as ours, by the righteousness of our God and Savior, Messiah Yeshua.”

Jude called himself a servant in Jude 1:1, “Jude, a bond-servant of Yeshua the Messiah, and brother of James, to those who are the called, beloved in God the Father, and kept for Messiah Yeshua.”

So I ask you, are you a servant of the Lord? Do you have a servant’s heart? If not, pray to the Lord to give you one, for serving one another is why Yeshua came, and He is our example. Love one another, that is what it is all about, and there is no greater love than for one to lay down his life for another. That is what serving is all about: crucifying your flesh and denying yourself to put someone else’s needs before yours. God has given us all gifts, and we must use our gifts serving Him. We must also grow and mature in our walk with God, as Ephesians 2:19-22 tells us that we are growing into the Temple of God: “So then you are no longer strangers and aliens, but you are fellow citizens with the saints, and are of God’s household, having been built on the foundation of the apostles and prophets, Messiah Yeshua Himself being the cornerstone, in whom the whole building, being fitted together, is growing into a holy temple in the Lord, in whom you also are being built together into a dwelling of God in the Spirit.” And also in Ephesians 4:11-16 it says, “And He gave some as apostles, and some as prophets, and some as evangelists, and some as pastors and teachers, for the equipping of the saints for the work of service, to the building up of the body of Messiah; until we all attain to the unity of the faith, and of the knowledge of the Son of God, to a mature man, to the measure of the stature which belongs to the fullness of Messiah. As a result, we are no longer to be children, tossed here and there by waves and carried about by every wind of doctrine, by the trickery of men, by craftiness in deceitful scheming; but speaking the truth in love, we are to grow up in all aspects into Him who is the head, even Messiah, from whom the whole body, being fitted and held together by what every joint supplies, according to the proper working of each individual part, causes the growth of the body for the building up of itself in love.

If we all come together and serve one another using our gifts that God has given us, just think what we can accomplish for the Kingdom!

Who Made You Judge?

Can You Learn to Prophesy?