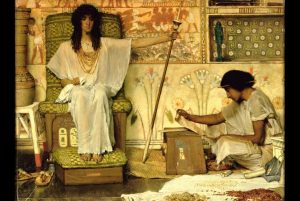 In this week’s portion, Joseph is lifted up to the position of a ruler in Egypt. Due to a widespread famine, his brothers have to come down from Canaan to get food. Joseph devises a plan to find out if his brothers have changed from their hateful ways. Even after all his siblings have put him through, Joseph still has a deep love for them.

In the previous portion, Joseph had interpreted the dream of his fellow inmates in the dungeon of Egypt. Fulfilling Joseph’s interpretation of his dream, Pharoah’s cupbearer is restored to his position, and subsequently loses all thoughts of Joseph and the dungeon. This week’s portion begins with Pharoah now having dreams which disturb him greatly (Genesis 41:1-8). At this, the cupbearer recalls how Joseph had interpreted his own dream, and Joseph is brought before Pharoah (verses 9-14). After telling him that the dreams meant there would be a famine (verses 28-31), Pharoah appoints Joseph to head up the efforts to store up grain during the seven years of plenty which were to come before the seven years of drought (verses 38-41). After all that Joseph had gone through, he was now given a place of great authority, and one with much more power than he would have had back in the land of his fathers. If we prove ourselves faithful to God during our trials, He is faithful to bless us abundantly through His great mercy (Genesis 22:15-18, Job 42:10-12, Revelation 21:7).

There is still one matter that must be addressed in Joseph’s life, however: he must meet his brothers. All of the wrongs that had been done to Joseph had been made right, except for his relationship with the other sons of Jacob. When the famine begins, it is not only in Egypt, but it is “in all the lands,” (verse 54). Joseph’s brothers hear that Egypt is selling grain, and so they head down to purchase food for their families. Little do they know that their brother is there waiting for them.

“When Joseph saw his brothers he recognized them, but he disguised himself to them and spoke to them harshly,” (Genesis 42:7). His brothers do not recognize Joseph, since he has grown up over the years, as well as due to the fact that as an Egyptian with a position of authority, his appearance and style of dress would have been drastically different. Joseph accuses his brothers of being spies, and he treats them as if they are enemies, putting them in prison for three days. Then he lets all but Simeon go back to Canaan, and says that if they come back with their youngest brother Benjamin, then he will let Simeon go.

We may mistakenly believe this was all pure retaliation on the part of Joseph, but there is a deeper explanation for his actions. If he wanted to get revenge on his brothers, he could have had them all killed or punished in many different ways. This was not the case. On the contrary, he loved his brothers and longed to reveal who he was, but first he needed to know that they had truly repented of the way they treated him. To find out whether this is so, he needs to see if they will easily give up their brother Simeon, and later when they return to Egypt for more food, Benjamin (Genesis 44:1-17).

Just like Joseph, we are called to love our brother, regardless of how they have treated us in the past. “We know love by this, that He laid down His life for us; and we ought to lay down our lives for the brethren,” (1 John 3:16). Even if we feel we have the authority or the right to exact punishment on others for the harm they have caused us, we need to give it over to God (Luke 6:27-28, Romans 12:19). Perhaps like Joseph we need to test the ones who have harmed us to see if they have truly changed, but this can only be done from a pure heart that longs for restoration. “Little children, let us not love with word or with tongue, but in deed and truth,” (1 John 3:18).

Vayeshev: The Faithfulness of Joseph