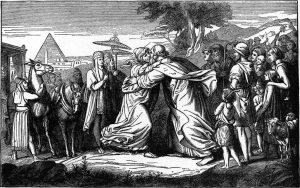 The reconciliation of Joseph with his family is one of the more heartwarming moments in Scripture. This event, however, was not only an important experience in their life, but was a foreshadowing of things that are yet to come.

After finding that his brothers are ready to accept him, Joseph reveals that he is their brother who they sold into slavery (Genesis 45:1-3). His brothers are rightfully confused. This man they had been conversing with all of this time, an Egyptian prince, was their brother. It seemed impossible, yet here it was playing out right in front of them. Amidst many tears, Joseph and his brothers are reunited. All of the suppressed pain and hardship of years gone by was all coming back to the surface. Joseph is not angry or expecting an apology, but he speaks words of comfort and encouragement to his brothers (verses 4-5, 24).

The brothers are sent back to Canaan to bring Jacob and each of their own families back to Egypt to settle in the best of the land (verses 16-20). God knows that Jacob is concerned about moving down to Egypt. He knew the promise God had made to his fathers, that He would give the land of Canaan to his descendants (Genesis 26:3). God reassures Jacob, “I am God, the God of your father; do not be afraid to go down to Egypt, for I will make you a great nation there. I will go down with you to Egypt, and I will also surely bring you up again,” (Genesis 46:3-4).

This would all be a good enough story if it was only that, an isolated event. But the tale of Joseph and his brothers holds a lot of prophetic value as well, both explicitly and under the surface. The most obvious prophecy involving this reunion is found in Ezekiel 37:15-28. At the time of this prophecy, the nation of Israel was divided into the kingdom of Israel and the kingdom of Judah. God illustrates through Ezekiel that one day the two houses will be made one again, just as in the days when Joseph and his brothers were reunited (verse 19). As of now, many who are of the people of Israel are unaware, due to their dispersal among the nations. But God will draw His people back from all of the places they were scattered to (verses 21-22) in order to fulfill the words he spoke to Jacob, “I will surely bring you up again.” This is what the Jewish people expect the Messiah to do, and that is exactly what He will do when He returns (Ezekiel 37:24).

There is yet another part of this story. Over the years, many have noticed that an interesting picture of Yeshua the Messiah is foreshadowed in the story of Joseph and his brothers. Just as Joseph was rejected by his brothers, so too was Yeshua for the most part rejected by the Jewish people. Although his brothers assumed he had died, Joseph was alive in Egypt, and ascended to a place of authority, just as Yeshua also resurrected and ascended to the right hand of the Father in heaven. The reason God allowed Joseph to go down to Egypt was so that the world would be saved from the serious drought. Likewise, the reason God allowed the Jewish people to be blind to their Messiah was so that the Gentiles could receive salvation. Just as Joseph was disguised as an Egyptian so that his brothers wouldn’t recognize him, so too in our time Yeshua has been disguised as a Gentile so that the Jewish people do not recognize Him as the Messiah prophecied of in the Scriptures.

All of these parallels lead up to the reunion of the Messiah and His people. Just as Joseph and his brothers experienced a bittersweet reunion, so too will Yeshua and the Jewish people: “They will look on me, the one they have pierced, and they will mourn for him as one mourns for an only child, and grieve bitterly for him as one grieves for a firstborn son,” (Zechariah 12:10). Just as Joseph comforted his brothers, so too Israel will be comforted (Hosea 2:14-15). They will be bewildered that their Messiah has been here all along, but they did not recognize Him. But it was all part of God’s plan: “God sent me before you to preserve for you a remnant in the earth, and to keep you alive by a great deliverance,” (Genesis 47:7).