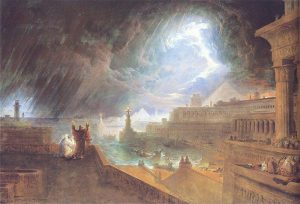 One of the ways God chooses to reveal Himself to people is through supernatural events, what we often call signs and wonders. Typically when we think of these events, we think of healings or other such positive miracles, but throughout Scripture we also see signs and wonders which cause destruction. The same motivation lies behind both the destructive and creative/restorative supernatural events, and that is to draw people to God through the witnessing of His power.

When God sent Moses to set the people of Israel free from their slavery in Egypt, He equipped him with a few miracles which he could do before Pharaoh. God progressively brought more and more extravagant and supernatural events upon Egypt, until everyone in the land knew for certain that this could only be from the hand of God. It is true that God could have found a way to allow the people of Israel to go without the assorted plagues and pestilences that fell upon the people of Egypt, but His will was that not only would the people of Israel be set free, but that those of the Egyptians whose hearts were willing would come to belief in God as well.

He intentionally allowed Pharaoh to be obstinate so that His power would be made clear: “But I will harden Pharaoh’s heart that I may multiply My signs and My wonders in the land of Egypt,” (Exodus 7:3). Some people take objection to this, saying that God was unjust in bringing judgment against people who were not actively involved in oppressing the Israelites in slavery, when He could have simply softened Pharaoh’s heart so that he would be favorably inclined towards the Israelites. This viewpoint fails to take into account the fact that God is purely just, and He alone knows the hearts of mankind. These acts were done not to punish the innocent, but rather to bring them into knowledge of the truth: “The Egyptians shall know that I am the Lord, when I stretch out My hand on Egypt and bring out the sons of Israel from their midst,” (Exodus 7:5). While many of the Egyptians followed Pharaoh’s stubborn example through these punishments, God has shown throughout Scripture His willingness to show mercy on those who trust in Him, and we can be sure that the same was true for the Egyptians who came to believe in God through this experience.

Not only did God desire for Israel and Egypt to come to believe in His might, but that all of the nations who heard of it would stand in awe of Him as well: “For if by now I had put forth My hand and struck you and your people with pestilence, you would then have been cut off from the earth. But, indeed, for this reason I have allowed you to remain, in order to show you My power and in order to proclaim My name through all the earth,” (Exodus 9:15-16). The plagues on Egypt were part of the testimony that the people of Israel were to the nations. Later, when the spies went into the promised land, Rahab told them that all of the land was in fear because they had heard what God had done for Israel, and the plagues were the first step in that process (Joshua 2:10).

Signs and wonders on such a large scale were not only present in the exodus from Egypt, but have occurred throughout Scripture, which also prophesies that there will be one final time of supernatural destruction. Revelation 8 tells us a few of the tribulations that will fall upon the earth, some of which bear striking similarities with the plagues with which God railed upon Egypt: there will be hail and fire mixed with blood, the sea will become blood, the creatures within the sea will die, and there will be great darkness. Peter also tells us, “The heavens will pass away with a roar and the elements will be destroyed with intense heat, and the earth and its works will be burned up,” (2 Peter 3:10). We can learn a lot about this time by remembering the plagues in Egypt. Those plagues were done so that the power of God might be made known to those who were held in doubt, and so that the people of Israel could be set free with a mighty hand. So too in those final days, the earth will be destroyed so that our redemption from sin and death will be made complete. The signs and wonders which take place will also serve to show the mighty hand of God and cause some to believe in Him before it is too late. While it is generally and rightfully viewed as a time of judgment, God often reveals His mercy through judgment. Justice and mercy are not opposed to each other, but through judgment God reveals His mercy and lovingkindess toward mankind, giving us every opportunity to repent and draw near to Him.

Since God knows the heart of man, He possess a foreknowledge of what each of us will choose to do, and will use that according to His purposes: “So then it does not depend on the man who wills or the man who runs, but on God who has mercy. For the Scripture says to Pharaoh, ‘For this very purpose I raised you up, to demonstrate My power in you, and that My name might be proclaimed throughout the whole earth.’ So then He has mercy on whom He desires, and He hardens whom He desires,” (Romans 9:16-18). Let us always pay attention to know our position before God so that we may humbly take refuge in Him in the day of judgment.

Bo: A Memorial of Redemption