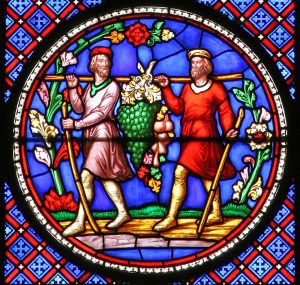 This portion depicts the sad results of the Israelites’ unbelief. After the spies come back from the land of Canaan, they tell the people that the inhabitants of the land are too powerful to overcome. We see that the writer of Hebrews warns us, believers, about falling into disobedience according to their example. Therefore we are going to take a closer look and see what this means for us.

Although they saw the great blessing which rested upon the land they were set to enter, the spies are struck with fear at the sight of the inhabitants of the land: the Nephilim (Genesis 6:4). Fearing for their lives, the people begin to blame Moses and Aaron, and accuse God of bringing them out of Egypt and through the wilderness only to die in battle and have their wives and children taken captive. So frenzied is their unbelief that they are set to stone Caleb when he tries to encourage the people that the Lord will fight for them. God descends into the tabernacle and speaks with Moses: “The Lord said to Moses, ‘How long will this people spurn Me? And how long will they not believe in Me, despite all the signs which I have performed in their midst?'” (Numbers 14:11).

The people experienced all of the signs and wonders of God as He brought them out of Egypt and sustained them in the wilderness. Despite this, they did not truly believe in God. God tells them that their worst fears would come upon them: “Your corpses will fall in this wilderness, even all your numbered men, according to your complete number from twenty years old and upward, who have grumbled against Me” (Numbers 14:29). For each day that the spies were in the land of Canaan, the people will spend one year wandering the wilderness: 40 years, until all of that generation has died except for Joshua and Caleb, who both trusted God.

“When Moses spoke these words to all the sons of Israel, the people mourned greatly. In the morning, however, they rose up early and went up to the ridge of the hill country, saying, ‘Here we are; we have indeed sinned, but we will go up to the place which the Lord has promised'” (Numbers 14:39-40). Even though they acted as if they had repented and were ready to believe in God, they once again were showing their unbelief. God had told them that they would not go into the land, but they did not believe Him and sought to enter the land by their own power: “But they went up heedlessly to the ridge of the hill country; neither the ark of the covenant of the Lord nor Moses left the camp. Then the Amalekites and the Canaanites who lived in that hill country came down, and struck them and beat them down as far as Hormah” (Numbers 14:44-45).

The hand of the Lord had been great among that generation in all of their journeys. We read through all of these accounts and ask ourselves, how is it that they did not believe after all that they had been through? We say that “seeing is believing,” and this generation had enough sights to sustain anyone for a lifetime, yet they did not believe. It is not that they did not believe that God was among them or that He existed, for they said, “Why is the Lord bringing us into this land, to fall by the sword?” (Numbers 14:3). Their lack of belief was not whether God was present in their lives, but whether He would fulfill His words to them and bring them into the promised land.

This is important to understand, for the writer of Hebrews warns us against becoming like that generation. He says, “Take care, brethren, that there not be in any one of you an evil, unbelieving heart that falls away from the living God. But encourage one another day after day, as long as it is still called ‘Today,’ so that none of you will be hardened by the deceitfulness of sin. For we have become partakers of Messiah, if we hold fast the beginning of our assurance firm until the end” (Hebrews 3:12). We are here being warned against something which accumulates day after day if we are not careful. As we saw, the belief was not whether or not God existed, but whether or not He would be gracious in fulfilling His promise.

So what is the promise that we must guard ourselves against disbelieving? It is the same promise which that generation refused to believe in the wilderness: that God would bring them into the promised land, the Kingdom: “Therefore, let us fear if, while a promise remains of entering His rest, any one of you may seem to have come short of it” (Hebrews 4:1). Even if we believe in our minds that Yeshua died for our sins, unless we live according to that belief it is as if we do not believe at all: “And to whom did He swear that they would not enter His rest, but to those who were disobedient? So we see that they were not able to enter because of unbelief” (Hebrews 3:18-19). The people did not believe that God would help them if they were obedient and went in to fight against the inhabitants of the land. In the same way, we must believe not only that God exists, but that He will fight alongside us in our battle against sin. We cannot enter the land by our own military power, but rather when we trust in Him, He will bring us into His rest: “Therefore let us draw near with confidence to the throne of grace, so that we may receive mercy and find grace to help in time of need” (Hebrews 4:16).