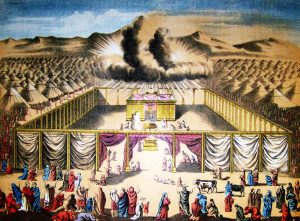 The work of the tabernacle begins with an offering, although not one from the herd: “Tell the sons of Israel to raise a contribution for Me; from every man whose heart moves him you shall raise My contribution” (Exodus 25:2). The people of Israel were to voluntarily give from their precious metals, animal skins, dyes, and other valuable possessions which would be used in the construction of the tabernacle (verses 3-7).

Right from the beginning, God makes His purpose for the building of the tabernacle clear: “Let them construct a sanctuary for Me, that I may dwell among them” (Exodus 25:8). The reason God wanted the tabernacle to be built was so that He could dwell among His people. Even though God is omnipresent and infinite, He in a sense limited Himself because He wanted to dwell in the midst of the people of Israel. All of the rituals and intricate necessities of the sacrificial system were there for a reason, that being to purify the people so that God’s presence would not consume them. We see what happened when people failed to respect the power of God and disobeyed His rules (Leviticus 10:1-2, 1 Chronicles 13:10), which were set up not to punish the people, but to protect them and allow them to draw near to God.

Where did the idea for all of the items in the tabernacle come from? Did God just make them up to be symbols for only that particular time and place? God tells Moses, “According to all that I am going to show you, as the pattern of the tabernacle and the pattern of all its furniture, just so you shall construct it” (Exodus 25:9). The fact that there is a heavenly worship service is evident throughout Scripture, and the tabernacle was meant to be a physical copy of this heavenly worship, as the writer of Hebrews tells us of the priests, “They serve a copy and shadow of the heavenly things. For when Moses was about to erect the tent, he was instructed by God, saying, ‘See that you make everything according to the pattern that was shown you on the mountain'” (Hebrews 8:5). Does the fact that it is a copy and a shadow mean that the earthly tabernacle had no value, or that it was “only” symbolic? No, but the earthly tabernacle and temple, as glorious and holy as they were, pale in comparison with the actual heavenly service which they are a model of.

In contrast with our modern church services, the sacrificial system was the framework for worship, and it encompassed every area of life. Today when we think of worship we most often think of praise and prayer, and this is a way in which we draw near to God. The tabernacle provided the place and the method for a person to draw near to God, which is what worship is all about. Today, since we don’t have a temple, we experience this on a spiritual level, for example through songs and prayer. These forms of worship were also present in the tabernacle and temple (Psalm 27:6, Acts 22:17), but in the tabernacle and temple the worshippers had the accompanying benefit of being close to the physical cloud of glory and being able to see God’s presence in their midst. While a person could still pray and hear God in their home, the tabernacle was a place one could go to really feel God and form a deeper connection with Him.

God does not change, and neither does the way in which He is worshipped. We see in John’s heavenly experiences in Revelation that this worship system is still active (Revelation 11:19, 14:15, 15:5-6). Why then in Revelation 21:22 do we see that there is no temple in the New Jerusalem? Because the physical defilement which is inherent in our human nature will be removed, and God will be able to dwell among us without the burden of physical defilement. In fact, He Himself will be our tabernacle.

The tabernacle was more than just a symbolic lesson about the sacrifice of Yeshua. It was a copy and a shadow of the heavenly system of worship which takes place to this day. By understanding more about the earthly system of worship, we can learn more about what this means in regard to the prophecies about a future day when the temple will be rebuilt as well as spiritual lessons for us to use today. Let us perform our duty as a royal priesthood, offering our bodies as living sacrifices, holy and pleasing to God, which is our spiritual service of worship.

Mishpatim: Sermon on the Mount

One thought on "Terumah: The More Perfect Tabernacle"