Toldot: Jacob Have I Loved 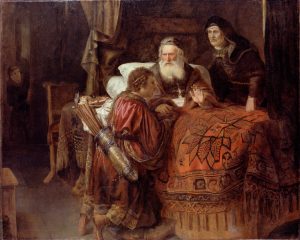 Jacob and Esau are presented throughout Scripture as polar opposites. Although the two are brothers, their relationship with God and with His plan brings them down two different paths. Paul uses their story to make a point about the relationship between the Jews and the Gentiles and in turn each group’s relationship with God. Let’s find out what’s going on here.

First of all, we would do well to find out exactly who Jacob and Esau were: “Now these are the records of the generations of Isaac, Abraham’s son: Abraham became the father of Isaac… Isaac prayed to the Lord on behalf of his wife, because she was barren; and the Lord answered him and Rebekah his wife conceived,” (Genesis 25:19, 21). God honored the prayer of Isaac and blessed him and Rebekah with not only one child, but twins. Even in the womb, however, the future of the two brothers was being played out: “But the children struggled together within her; and she said, ‘If it is so, why then am I this way?’ So she went to inquire of the Lord. The Lord said to her, ‘Two nations are in your womb; and two peoples will be separated from your body; and one people shall be stronger than the other; and the older shall serve the younger,'” (Genesis 25:22-23). The older of the twins is Esau, with Jacob following close behind, even clutching Esau’s heel. The two nations which God spoke of were the nation of Edom, coming from Esau, and the nation of Israel, coming from Jacob, who God later gives the name Israel.

Paul brings in this imagery in speaking about the position of Israel. In Romans 9, he begins by explaining his earnest desire that his brothers, the physical descendants of Jacob, would come to see that Yeshua is the Messiah, while at the same time explaining that “they are not all Israel who are descended from Israel,” (Romans 9:6). In other words, those from other nations who believe in Yeshua and keep His commands now have a part in the community of Israel. Likewise, not all those who are physical descendants of Jacob are a part of the true Israel, but only if they show the same faith and obedience as their fathers. He explains: “And not only this, but there was Rebekah also, when she had conceived twins by one man, our father Isaac; for though the twins were not yet born and had not done anything good or bad, so that God’s purpose according to His choice would stand, not because of works but because of Him who calls, it was said to her, ‘The older will serve the younger.’ Just as it is written, ‘Jacob I loved, but Esau I hated,'” (Romans 9:10-13).

It would seem that Paul is turning the tables. Have the Gentiles now become Jacob and Israel turned into Esau? This cannot be true; but rather he explains, “From the standpoint of the gospel they are enemies for your sake, but from the standpoint of God’s choice they are beloved for the sake of the fathers; for the gifts and the calling of God are irrevocable,” (Romans 11:28-29). When Paul compares Israel to Esau, it is simply that: a comparison, a way of presenting an idea. He is explaining that Israel has temporarily been blinded in order that the rest of the world may come to salvation. He again clarifies the position of Gentiles in the body of Yeshua: “I say then, they did not stumble so as to fall, did they? May it never be! But by their transgression salvation has come to the Gentiles, to make them jealous… But if some of the branches were broken off, and you, being a wild olive, were grafted in among them and became partaker with them of the rich root of the olive tree, do not be arrogant toward the branches… Do not be conceited, but fear; for if God did not spare the natural branches, He will not spare you, either.” (Romans 11:11, 17, 20).

Israel has never ceased from being Israel; Jacob has never ceased from being loved: “‘I have loved you,’ says the Lord. But you say, ‘How have You loved us?’ ‘Was not Esau Jacob’s brother?’ declares the Lord. ‘Yet I have loved Jacob’… Your eyes will see this and you will say, ‘The Lord be magnified beyond the border of Israel!'” (Malachi 1:2, 5). At certain times in the history of the Jewish people, it has seemed as if God no longer loved them, but that is not the case. One day, their eyes will be opened to their Messiah, and they will see that the Lord has truly been magnified beyond the border of Israel.

Chayei Sarah: Children of the Freewoman