Vayeshev: The Faithfulness of Joseph 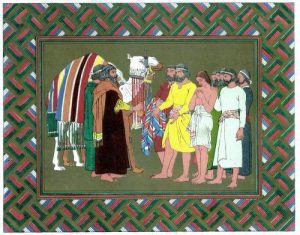 It is hard to read the story of Joseph without feeling some sense of pity for him. In some ways, we feel able to empathize with his struggles when nothing seems to be going right in our own lives. Throughout all of these tribulations, he proved himself faithful to God, an example for us to follow.

This week’s parashah contains the low part of Joseph’s life. God gave him prophetic dreams in his youth, telling him that he would be the head of his brothers (Genesis 37:5-11). Combined with the fact that Joseph was their father’s favorite, his brothers grow jealous enough to kill him: “Judah said to his brothers, ‘What profit is it for us to kill our brother and cover up his blood? Come and let us sell him to the Ishmaelites and not lay our hands on him, for he is our brother, our own flesh.’ And his brothers listened to him,” (verses 26-27). Stephen affirms this in his testimony before the Sanhedrin: “The patriarchs became jealous of Joseph and sold him into Egypt. Yet God was with him,” (Acts 7:9).

Joseph ends up becoming a slave in Egypt, but it was not as if God had abandoned him: “Now his master saw that the Lord was with him and how the Lord caused all that he did to prosper in his hand. So Joseph found favor in his sight and became his personal servant; and he made him overseer over his house, and all that he owned he put in his charge,” (Genesis 39:3-4). It is likely that Paul drew from the record of Joseph’s experience when he gave his instructions to those who were slaves (Ephesians 6:5-7, Colossians 3:22-25). This advice is not only for slaves, but for workers who are accountable to a manager or other position of authority. Like Joseph, do this work as if you are working for God and not man, proving yourself faithful in whatever your hands find you to do.

These good times do not last, however. Joseph’s master, Potiphar, has a wife who takes a liking to Joseph. He once again shows where his loyalties lie: “But he refused and said to his master’s wife, ‘Behold, with me here, my master does not concern himself with anything in the house, and he has put all that he owns in my charge. There is no one greater in this house than I, and he has withheld nothing from me except you, because you are his wife. How then could I do this great evil and sin against God?” (Genesis 37:8-9). Joseph is not concerned with what she thinks, or even what his master thinks, but only with what God thinks.

Potiphar’s wife does not appreciate being turned down, and spreads a false report about Joseph. He once again finds himself suffering for doing the right thing: “So Joseph’s master took him and put him into the jail, the place where the king’s prisoners were confined; and he was there in the jail. But the Lord was with Joseph and extended kindness to him, and gave him favor in the sight of the chief jailer,” (verses 20-21). Not much of Joseph’s emotions are spoken of in these passages, but it is evident that he didn’t let these trials damper his faith or cause him to be dejected, determining that wherever God put him, he would be light in the darkness. We see that being wrongfully imprisoned is not isolated only to Joseph (Jeremiah 37:15-16, Luke 3:20, Acts 12:5, 16:22-24). As Peter tells us, “It is better, if God should will it so, that you suffer for doing what is right rather than for doing what is wrong,” (1 Peter 3:17). Whether we are suffering because of something we did or simply because it is God’s will, we can find peace in the fact that if we turn to Him, He will also turn to us and give us peace in all of this.

Due to the exceptional circumstances surrounding Joseph’s troubles, we may be tempted to consider his steadfastness as something out of reach or beyond what is expected of us. On the contrary, as believers we can expect to go through difficult times, “For a righteous man falls seven times, and rises again, but the wicked stumble in time of calamity,” (Proverbs 24:16). Through these times we show the substance of our faith. The life of a believer is not exemplified by good times, but rather a peace and a perseverance through every difficulty (James 1:2-4). In our various sufferings, we can hold unswervingly to our trust in God, who upheld Joseph through slavery, temptation, and imprisonment alike, believing that He will do the same for us.