Matot + Massei: Drive Out the Inhabitants 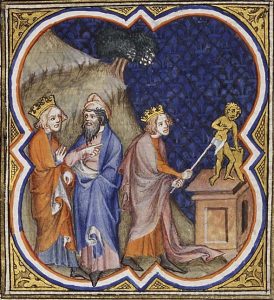 As the time for Israel’s wanderings in the wilderness begin to draw to a close, God instructs Moses on how the people are to conduct themselves when they enter the land. They are not to show any mercy on the inhabitants, but are to drive them out and destroy their idols. What can we learn from God’s instructions to the people who are about to enter the land?

In the plains of Moab, near the Jordan river, God begins to speak to Moses. Although he will not enter the land, he is still the authority figure for the people of Israel. God tells him, “Speak to the sons of Israel and say to them, ‘When you cross over the Jordan into the land of Canaan, then you shall drive out all the inhabitants of the land from before you, and destroy all their figured stones, and destroy all their molten images and demolish all their high places'” (Numbers 33:51-52). God was giving the people the land. It would now be in their stewardship, and they were responsible for keeping it free from idolatry. While it may initially seem cruel to completely drive everyone out of the land, it was because God was using the people of Israel to punish the inhabitants for defiling the land with their idolatry and sinful practices (Leviticus 18:24-25).

Likewise, if the people of Israel refused to obey God’s commands in this matter, then they would be ensnared by the idolatrous practices of the people whose land they were supposed to inhabit: “But if you do not drive out the inhabitants of the land from before you, then it shall come about that those whom you let remain of them will become as pricks in your eyes and as thorns in your sides, and they will trouble you in the land in which you live. And as I plan to do to them, so I will do to you” (Numbers 33:55-56). As it turned out, this is exactly what ended up happening. The Israelites allowed some of the inhabitants of the land to remain in their midst instead of driving them out, and throughout the book of Judges we see the results of their disobedience.

Although we as believers today do not need to worry about military conquest, the lesson God was trying to teach the people remains ever-present throughout the ages. In order for us to live the way God wants us to, we must eradicate sinfulness from our lives with extreme prejudice. If we allow anything, no matter how mundane or insignificant it may seem, that small trace of sin will eventually blossom into something which is difficult to control. This involves putting to death the sinful nature and growing in holiness. James instructs us, “Therefore put away all filthiness and rampant wickedness and receive with meekness the implanted word, which is able to save your souls” (James 1:21). The danger of falling into idolatry is just as dangerous today as it was back then. Although we do not have the temptation to worship physical gods of silver or stone, anything that takes precedence over God in our lives is idolatry and needs to be removed.

The children of Israel, instead of obeying God, thought that they knew better. Many of the Canaanites were allowed to either dwell among the people or were subjected to slave labor, but this was not what God had commanded (Judges 1:27-35). They thought that they would be able to control them and stand firm against idolatry, but they were wrong. Likewise, we must never think that a matter of sin is under our own control. Like the Israelites who thought they could get some use out of the Canaanites instead of driving them completely out of the land, we must not delude ourselves into thinking that a particular behavior which could lead us into sin or idolatry is worth continuing in because of some other benefit which we may derive from it.

Not only does this apply to keeping ourselves free from sin in our personal lives, but this also applies to our families and congregations. We are not supposed to turn a blind eye to sin within our midst, but we are to confront it with love and humility. If one among us is deliberately sowing discord or leading some astray, however, these are not to be tolerated. Yeshua (Jesus) tells the church of Thyatira, “I know your deeds, and your love and faith and service and perseverance, and that your deeds of late are greater than at first. But I have this against you, that you tolerate the woman Jezebel, who calls herself a prophetess, and she teaches and leads My bond-servants astray so that they commit acts of immorality and eat things sacrificed to idols” (Revelation 2:19-20). Although the deeds of the community were righteous, their flaw was that they allowed the idolater to remain in their midst and lead others astray. Today this most often manifests itself not as a single person leading others astray, but a general mood or worldview among the congregants, especially that of worldliness or lukewarm relationship with God, which threatens the spiritual well-being of the congregation.

Let us remain vigilant in allowing the Holy Spirit to work within us as we drive all sin and idolatry from our hearts and our congregations so that we may continue to grow in holiness and love through the power of Yeshua our Messiah.

Pinchas: The Zeal of Phinehas