Chayei Sarah: Children of the Freewoman 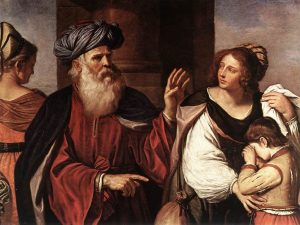 This weeks portion begins with the death of Sarah. After a full 127 years ripe with wanderings and trials, she finally found her rest: “The life of Sarah was one hundred and twenty-seven years; these were the years of the life of Sarah. Sarah died in Kiriath-arba (that is, Hebron) in the land of Canaan; and Abraham went in to mourn for Sarah and to weep for her,” (Genesis 23:1-2). After her burial, Abraham sends out his servant to find a wife for Isaac his son so that he may be consoled in his time of loss. Paul uses an allegory in Galatians 4 which compares Sarah and Hagar to the old and new covenants. What do the covenants have to do with Sarah and Hagar?

After God promises a son to Abram, he and his wife grow weary of waiting for God to do as He promised, or perhaps they thought they had done something to merit His disfavor: “So Sarai said to Abram, ‘Now behold, the LORD has prevented me from bearing children. Please go in to my maid [Hagar]; perhaps I will obtain children through her.’ And Abram listened to the voice of Sarai,” (Genesis 16:2). Hagar conceives and gives birth to a son, Ishmael. This son, however, was not the one God had spoken of: “And Abraham said to God, ‘Oh that Ishmael might live before You!’ But God said, ‘No, but Sarah your wife will bear you a son, and you shall call his name Isaac,'” (Genesis 17:18-19).

Paul, in his allegory, likens Hagar to the covenant at Mount Sinai, known as the Old Covenant. The Old Covenant is not the Scriptures which we call the “Old Testament,” despite this name we so frequently call it as Christians; and it is not the Torah. The Old Covenant was the agreement of the people of Israel to follow God’s commands, when they said, “All that the LORD has spoken we will do, and we will be obedient!” (Exodus 24:7). What followed from that enthusiastic statement was a tendency to do just the opposite. This is why Paul says, “Now this Hagar is Mount Sinai in Arabia and corresponds to the present Jerusalem, for she is in slavery with her children,” (Galatians 4:25). So long as obedience to God is done solely through the flesh, sin, being the inability to fulfill God’s commands, will hold in bondage. When Paul chastises the Galatians for wanting to be “under law,” he is not condemning them for trying to walk in God’s ways. Rather he is condemning their reliance on the flesh, their seeking to gain hold of the promise through spiritless obedience, just as Abraham and Sarah did when they tried to bring forth the promised child through physical means alone.

So what about Sarah? Her conception of Isaac was something much more miraculous. For up until the age of 90, she had been unable to bear children. Most rational people would agree that a 90-year-old and 100-year-old couple are not going to be having children. From a human point of view, it would appear impossible for Sarah to bring forth a child so late in life, especially after being barren up until that age; but with God, all things are possible.

After Paul introduces Hagar as representing the earthly city of Jerusalem, he brings her into contrast with Sarah, who represents the heavenly city of Jerusalem: “The Jerusalem above is free; she is our mother,” (verse 26). If Hagar is the Old Covenant, then Sarah is the New Covenant. The New Covenant is not a new set of rules to follow, but it is a miraculous and supernatural ability to do that which was previously impossible through the flesh: “‘This is the covenant I will make with the people of Israel after that time,’ declares the Lord. ‘I will put my law in their minds and write it on their hearts, and they will all know me, from the least of them to the greatest,'” (Jeremiah 31:33-34).

From a human perspective, it is impossible to keep God’s commands perfectly. If we try to keep them merely through our own efforts, we will be committing the mistake of Abraham and Sarah, becoming, as it were, a child of the bondwoman. But if we put our faith and hope in God through Yeshua (Jesus), walking in the Spirit, then He will be faithful to fulfill His promise in writing His law on the tablets of our hearts. It is only then when we will no longer be held in bondage to the sinful nature, but will be fulfilling our role as children of promise: “So then, brethren, we are not children of a bondwoman, but of the free woman,” (verse 31).

Toldot: Jacob Have I Loved