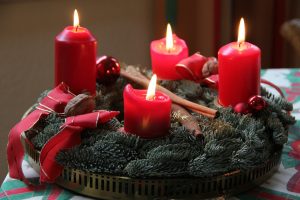 “For a child will be born to us, a son given to us; and the government will rest on His shoulders; and His name will be called, Wonderful counselor, Mighty God, Eternal Father, Prince of Peace. There will be no end to the increase of His government or of peace, on the throne of David and over His kingdom, to establish it and to uphold it with justice and righteousness from then on and forevermore. The zeal of the Lord of hosts will accomplish this” (Isaiah 9:6-7).

Revelation 22:7 tells us, “And behold, I am coming quickly, Blessed is he who heeds the words of the prophecy of this book.” Revelation 22:12 tells us, “Behold, I am coming quickly, and My reward is with Me, to render to every man according to what he has done.” 1 Thessalonians 5:2 tells us, “For you yourselves know full well that the day of the Lord will come just like a thief in the night. While they are saying ‘Peace and safety!’ then destruction will come upon them suddenly like birth pangs upon a woman with child; and they shall not escape.” Advent is all about the birth pangs of the coming child, but this child is not a child, but the Messiah of Israel, the King of Kings and the Lord of Lords (Revelation 19:16).

Yeshua (Jesus) rebukes the Pharisees and Sadducees for not recognizing the signs of the time. Matthew records it in Matthew 16:2-3, “But He answered and said to them, ‘When it is evening, you say, “It will be fair weather, for the sky is red,” and in the morning, “There will be a storm today, for the sky is red and threatening.” Do you know how to discern the appearance of the sky, but cannot discern the signs of the times?’” This is why it is important to know what the Bible says and what Yeshua tells us we should be looking for. Let’s take a closer look.

The Signs of the Times

In Matthew 24, Yeshua gives us those warning signs. He tells us that many will come saying that they are the Messiah and they will lead many astray. There will be wars and rumors of wars. Nations will rise against nations. There will be famines and earthquakes, but all of this is just the beginning of birth pangs. He goes on to say that they will persecute and kill those who believe and because of this, many will fall away. Many false prophets will lead many away, but to the one who overcomes, he shall be saved.

In verse 15 he goes on to say, “Therefore when you see the Abomination of Desolation which was spoken of in the book of Daniel (which took place at the time of the Maccabees in the story of Hanukkah and the destruction of Jerusalem), then there will be a great tribulation.” Revelation 6 speaks of these things also in the Seal judgements, the first being a white horse, and he who sat on it had a bow; and a crown was given to him; and he went out conquering and to conquer.  The red horse was granted to take peace from the earth, and that men should slay one another. The black horse brought famine and high inflation. With the ashen horse, death and hades, a fourth of the earth was killed by the sword and famine and pestilence and by wild beasts.

Underneath the altar in heaven, the souls of those who had been martyred cry out, “How long, O Lord, holy and true, wilt Thou refrain from judging and avenging our blood on those who dwell on the earth?” Today Christians are being martyred and persecuted. All over the world we have seen an increase of persecution against not only Christians, but also an increase of anti-Semitism against the people of God (Israel).

The Epistles are full of warnings against false prophets and teachers. Today we have Pastors teaching congregations when they themselves do not even believe in the Word of God. Beware, churchgoers, make sure you yourselves know what the Word of God says, because Yeshua warns us that these false shepherds will lead many astray.

Paul tells Timothy in 2 Timothy 3:1-4, “In the last days difficult times will come. For men will be lovers of self, lovers of money, boastful, arrogant, revilers, disobedient to parents, ungrateful, unholy, unloving, irreconcilable, malicious gossips, without self-control, brutal, haters of good, treacherous, reckless, conceited, lovers of pleasure rather than lovers of God.”

One last sign: the One World order and the Antichrist who will rule over it (Revelation 12-13, 16-20). Today we have a global economy, which includes a global bank and stock market, and we have a global army and police force and food bank. Of course, most of all of this is run through the United Nations which has brought about this one world order.

So like never before, what we are seeing could be, in fact, the birth pangs of the Messiah and His coming could be soon. The question is: are you prepared? Next we will look at what we need to do to prepare for His advent.

Sins of our Forefathers, Part 11.