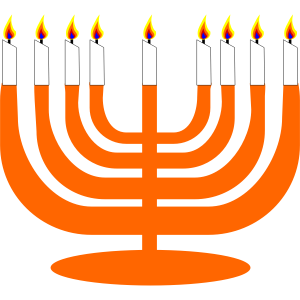 The people who walk in darkness will see a great light; those who live in a dark land, the light will shine on them” (Isaiah 9:2).

You may say to yourself, “I have never heard of the Christian celebration of Hanukkah.” Well, let me give you the background first. Yeshua (Jesus) celebrated Hanukkah. We see this in John 10:22-24, “At that time the Feast of Dedication (this is Hanukkah) took place at Jerusalem; it was winter, and Yeshua was walking in the temple in the portico of Solomon. The Jews therefore gathered around Him, and were saying, ‘How long will You keep us in suspense? If You are the Messiah tell us plainly.’”

Why is this significant? Because first, Yeshua kept Hanukah and we are His followers and what He does we need to follow in His footsteps. But also it is important what took place at this time. Let’s continue on with this discourse. In verses 25-26 Yeshua says, “I told you, and you do not believe; the works that I do in My Father’s name, these bear witness of Me. But you do not believe, because you are not My sheep.” What does the word believe mean? Vines tells it this way: “Pisteuo means to be persuaded of, reliance upon.” This is where we get the word “believer.”

In other words, if what Yeshua was saying is true and as believers we accept it as truth, then we must also believe that He is the Messiah that Israel was waiting for. Verses 27-28 continue the dialogue: “My sheep hear My voice and I know them, and they follow Me; and I give eternal life to them, and they shall never perish, and no one shall snatch them out of My hand.” Let’s continue laying the groundwork.

John 8:12 says, “Again therefore Yeshua spoke to them saying, ‘I am the light of the world; he who follows Me shall have the light of life.’” John 14:15: “If you love Me, you will keep My commandments.” We see that if we truly believe in Messiah Yeshua then we are believers and as believers we must hear His voice and follow in His footsteps and this means to keep His commandments because John 5:19 says, “Yeshua therefore answered and was saying to them, ‘Truly, truly, I say to you, the son can do nothing of Himself, unless it is something He sees the Father doing, for whatever the Father does, these things the son also does in like manner.’”

We too must do what Yeshua does, for He is following His Father and we must follow Him. We see that we are to keep His commandments; and what is His commandment pertaining to Hanukkah? Let’s take a closer look.

The Story of Hanukkah

We find the story of Hanukkah in the book of Maccabees. The story in a nutshell is about the Jewish people who were ruled by the king of Syria, King Antiochus. Antiochus wanted all the Jews to stop practicing the Torah and follow his pagan ways. But the Jewish people refused, so he destroyed their homes and he stormed the temple and defiled it and replaced the Ark of the covenant with a pagan god.

Many Jews ran and hid, but not old Mattathias and his five sons. When Mattathias could no longer fight, he appointed his son Judah to be their leader. He told them, “Be strong and brave.” Judah was called Maccabee, “the hammer,” and many people followed him and fought against the Syrians until they reached Jerusalem. They first went into the temple, which by now was all filled with weeds in the outer courtyard, and they took down the pagan idol and they restored the temple and its courtyards and rebuilt the altar. They rebuilt the menorah and exactly three years to the date, they relit the menorah and rededicated the temple. For eight days they celebrated joyfully before the Lord, for He had given them a great victory.

The Light Must Stay Lit

In Matthew 5:14, Yeshua tells His followers, “You are the light of the world. A city that sits on the mountain will not be hidden, nor do people kindle a lamp just to put it under the bushel measure, but on the menorah, to illuminate all who are in the house. So also, shine your light before sons of men, so that they may see your good deeds and praise your Father who is in heaven” (The Delitzsch Hebrew/English Translation). Yes, Yeshua was telling us that we need to be menorahs in this world.

In the verses before this, Yeshua was speaking about being persecuted. Today we have seen the Christian faith come under attack all over the world: people being martyred for their faith, people being persecuted for following God’s commandments. But our Messiah, our Savior, our Light tells us in Matthew 5:10-12, “Blessed are those who have been persecuted for the sake of righteousness, for theirs is the kingdom of Heaven. Blessed are you when men cast insults at you, and persecute you, and say all kinds of evil against you falsely on account of Me. Rejoice, and be glad for your reward in heaven is great, for so they persecuted the prophets who were before you.”

We, like the Maccabees of old, must stand tall and contend for the faith. We must shine our light in the midst of darkness, for we too will have the victory. We are people of the light and of the day. Our Messiah is the Light of the World and we follow in His footsteps as light in the dark world. We can not shrink in the midst of persecution, but we must be like that city that sits on a mountain top. We are lighthouses in the midst of the storm. Yeshua is the menorah that was in the temple and only pure oil was used to keep it burning day and night. Pure oil only comes from being crushed and pressed; so too with us, when we are persecuted, we are crushed and pressed but our oil will be pure and our light will shine all the brighter.

We are menorahs, and our light will never go out, so shouldn’t we also light a candle for the eight days of Hanukkah as a witness and a testimony to the world that we will not shrink back at persecution? But like the Maccabees, we will contend for the faith because we follow in our Messiah’s footsteps and we keep His commandments; and His commandment for us is to be the light to the nations, and we are going to shine in the midst of the darkness.

Advent, Part 1: What Are we Waiting For?