Pentecost Countdown, Part 4: Do You Love Me? 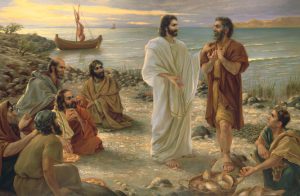 This week we want to continue our story from last week. The disciples and Yeshua (Jesus) are having breakfast by the seashore. We want to start now at John 21:15 where Yeshua turns to Peter to confront him about his loyalty as a disciple. We must remember that Peter denied Yeshua three times outside the court of the high priest, Caiaphas. So now Yeshua asks Peter, “Do you love Me more than these?” pointing to His other disciples. Peter answers, “Yes, Lord; You know I love You.” Consider how Peter must have felt at that moment. He felt remorseful already that he had denied the Master and now he is being asked about his love. Being confronted about our love of our Master is not a bad thing. We must all be confronted about this issue because we all sin and fall short of the glory of God. We all choose the way of the world (which makes us an enemy of God) instead of the way of God. We all need to be restored.

Yeshua asks him again, “Do you love Me?” Again, Peter answers, “Yes, Lord; You know that I love You.” Being asked once was bad enough, but now Yeshua was asking Him again. Did He not believe Peter? Was Yeshua insensitive to his feelings? And if that was not enough, Yeshua asked him a third time, “Do You love Me?” The Scriptures say that Peter was now grieved because Yeshua asked him the third time. Peter answered, “Lord, You know all things: You know that I love You.” Some theologians say that because Peter denied Yeshua three times that Yeshua had to ask him three times; others look at where the Torah says, “Let a thing be established by two or three witnesses,” and so that is why he asked three times; but I think it goes deeper than that. I think if we take a closer look at this, we see the significance behind asking him three times.

We see the number three is very significant in the Bible. Abraham took a three day journey to Mt. Morah to sacrifice Isaac, Moses said that Pharaoh needed to let the people go on a three day journey to sacrifice to their God, and Yeshua was raised after three days, to mention a few. So we see here that Yeshua asks Peter three times. He began by saying, “Simon, son of John….” Why did He not just call him Peter? And then, at that, why three times? In the days of the Master, this is how people knew who you were. They did not have last names. People in your home town knew you by your parents. They said of Yeshua, “Is this not the Carpenter’s son?”

God knows who we are, but do we really know ourselves? He knows our hearts. The Bible tells us in Jeremiah 17:9-10, “The heart is more deceitful than all else and is desperately sick. Who can understand it? I, the Lord, search the heart, I test the mind.” So I think that Yeshua was saying to Peter, “I know you and I know your heart.” I’m sure this is why Peter said, “Lord, you know all things.” We need to know and understand that the Creator of our soul knows us by name and He knows who we are. He knows our hearts better than we do. We can lie to ourselves and make ourselves believe anything by just reasoning away and rationalizing everything. Yeshua was getting to the heart of the matter: “Simon son of John, I am speaking to just you.” There could not be any question in his mind.

Then He asked Him, “Do you love Me?” Yeshua had Peter’s full attention. Three times He made Peter think about this question, just in case he answered the first time without thinking. It made him have to think once again. This is why God had Abraham take a three day journey, just to think about if he really was willing to offer up his son. So too with Peter, because what He told Peter next, Yeshua needed to know the answer and so did Peter. Yeshua said the first time, “Tend to My lambs.” The next time He said, “Shepherd My sheep,” and the third time He said, “Tend My sheep.” Yeshua knew that Peter loved Him. He knew who Peter was and that he was capable of the task that was being asked of him, but Peter needed to know for sure. He had to have the confidence to say, “Yes, Lord, I do love you.” It was because he had failed the Master so many times that it was for Peter’s sake that Yeshua kept asking the question.

What about you and I? God calls each of His people to Himself. Do we respond to His call? Do we say, “Yes, Lord, I love you,” and mean it, or is our heart just lying to us? God will never stop asking us that same question, “Do you love Me?” Yeshua said, “If you love Me then keep My commandments.” You see, following the Lord is not something to be taken lightly. He requires of us our lives. When He told Peter to tend to His sheep, this was a very important task because he was to care for what belonged to God. Are we not our brother’s keeper? Are we not to hear the cry of the poor? 1 John 3:17 says, “If you have this world’s possessions and you behold your brother in need and you close your heart against him, how does the love of God abide in you?”

We are all to tend to God’s lambs. We are all responsible for feeding God’s sheep. God knows your name and He knows you are able to do what He is asking of you. It may not be physical food they need, but maybe what your brother needs is spiritual food, the Word of God, or a word of encouragement, compassion, or even mercy. You must say to yourself, “_________, son/daughter of _________, do I love God? Then I must tend to His sheep,” and it may take three times before it really sinks in that this is what God requires of you.