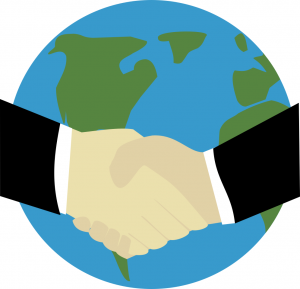 In today’s world, the predominant social trends continue to envelope the nations into a global community. This is happening not only in the political and economic realm, but the pursuit of world peace has also led to attempts at resolution of religious differences as a source of violence and discord. Since these efforts are pursued in the name of peace and love, we as believers must be cautious and understand what our stance should be, especially with end times prophecy in mind. This brochure will examine the Scriptural view of globalism, and then explain some of the ways this trend is currently manifesting itself, especially in regard to the church.

First of all, it is interesting to see the parallels between today’s attempts at globalism and the Biblical account of the Tower of Babel. After being commanded to fill the earth, or to spread out over it, the builders of this tower say to each other, “Come, let us build for ourselves a city, and a tower whose top will reach into heaven, and let us make for ourselves a name, otherwise we will be scattered abroad over the face of the whole earth” (Genesis 11:4). The purpose of this tower was to unite the people of earth in one place and toward one singular goal, in direct contradiction to God’s command. In response, God separates the languages in order to break up this unity of purpose and to cause the people to spread out. Globalism is therefore to repeat the sin of Babel. The concept of global peace and unity is not evil of itself, but in the hands of mankind that unity cannot truly be established in righteousness. It is only with the return of Messiah Yeshua (Christ Jesus) that this peace will occur, and it will happen so that all mankind will worship Him: “Now it will come about that in the last days the mountain of the house of the LORD will be established as the chief of the mountains, and will be raised above the hills; and all the nations will stream to it” (Isaiah 2:2), and, “The earth will be filled with the knowledge of the glory of the LORD, as the waters cover the sea” (Habakkuk 2:14). This is the globalism that we wait for, but it is not instituted or established by the will of man, and it is not a result of interfaith tolerance. It is the Sovereignty of God and the pure worship of Him. In direct opposition to this true era of unity, Scripture also speaks of a counterfeit globalism.

Revelation 13 introduces us to the beast, that is, the antichrist, and how he will gain control over all the nations and all the peoples of the earth through deception. This control is spiritual in that the beast will be worshiped as a god, and also economic in that the inhabitants of earth must receive the mark of the beast in order to engage in trade. Failure to receive the mark thus leads to physical death, while acceptance of the mark means spiritual death. We must not think that people will worship the beast only out of fear for their lives: “He performs great signs, so that he even makes fire come down out of heaven to the earth in the presence of men. And he deceives those who dwell on the earth because of the signs” (Revelation 13:13-14). There will be great deception associated with the rise of the beast, so that those who worship him will be fully convinced that their worship is toward one who deserves to be praised. A similar message is indicated in the words of Yeshua as He teaches about the end times: “For false messiahs and false prophets will arise and will show great signs and wonders, so as to mislead, if possible, even the elect” (Matthew 24:24).

Also associated with the beast is the Great Harlot in Revelation 17, also called Babylon the Great. This is widely regarded as being symbolic of a one-world religion, her harlotry being spiritual. Her prosperity is connected with the success of the antichrist, as she is said to be carried by the beast (Revelation 17:7). Therefore we can understand that this religion will be used in conjunction with the worship of the antichrist and in coordination with the political globalization.

One of the hallmarks of the end times that applies both to one-world religion and political globalism is a deceptive proclamation that peace will be the end result: “While they are saying, ‘Peace and safety!’ then destruction will come upon them suddenly like labor pains upon a woman with child, and they will not escape” (1 Thessalonians 5:3). While we as believers are commanded to make great efforts for peace, this does not come at the cost of tolerating falsehood and lies.

So we see that all of these Scriptures combine to reveal that the gathering together of the nations and the formation of a universal religion are signs that the time of the antichrist is approaching.

If we look carefully around us, we will notice that the process toward globalization and a universal religion has already begun. The most obvious example of the political unification of the world has been through the efforts of the United Nations. As a collective composed of the leaders of 193 states, the UN exercises an exceptional amount of authority over individual nations through the enforcement of international law.

Religion is an obvious point of conflict among people. The differences between religions boils down to truth against lies, and in many cases also involves deep-seated traditions and cultural expressions. The goal of the United Nations and other related organizations at this time is not to openly advocate for a renunciation of all religions in favor of one global religion, but instead they are currently working to foster an environment of tolerance among all religions. Part of this tolerance includes the sentiment that all religions are based on truth and are no less valid or correct than other religions, which also implies that we all ought to learn from and celebrate our differences of religious expression rather than affirm that other religions are false. One of the most influential and troubling events in this area was the Common Word initiative. In 2007, a delegation of 138 prominent Muslim leaders sent an open letter to Christians, saying, “based on verses from the Holy Qur’an and the Holy Bible… Islam and Christianity share, at their cores, the twin ‘golden’ commandments of the paramount importance of loving God and loving one’s neighbor… [A Common Word] was and is an extended global handshake of interreligious goodwill, friendship and fellowship and consequently of world peace.” In response to this open letter, many Christian leaders signed a response affirming this “common ground,” implying that the Muslim understanding of God and how to love Him is based in truth and serves as a foundation for building a relationship on. As a result of this agreement, the United Nations decided to institute the yearly World Interfaith Harmony Week in order to, “spread the message of harmony and tolerance among the followers of all the world’s religions, faiths and beliefs.”

Another large event which has similar goals is the World Alliance of Religions Peace Summit. This annual summit, started in 2014, has as its goal the complete cessation of war and strife by focusing on the common threads between all religions. An example of one aspect of this plan can be read in its draft of the Declaration of Peace and Cessation of War: “States should engage in multilateral consultations to deal with situations where differences attributable to religion or ethnicity pose a threat to peace so that necessary remedial action may be taken and to identify the root causes of a situation causing tension between different religious or ethnic groups, in order to adopt necessary measures to promote mutual understanding between the groups concerned.” In other words, whenever there seems to be an issue causing a disruption between two religious groups, the state should intervene to bring understanding between the two groups. Naturally, because of the message which Scripture brings and tells us to proclaim, tension will always result between us and the world—not because of a lacking desire for peace on our part, but quite the opposite, as Yeshua tells us, “Peace I leave with you; My peace I give to you; not as the world gives do I give to you” (John 14:27). He is our peace, and there is no peace but through Him. To those who refuse to put their faith in Him, we are “an aroma from death to death” (2 Corinthians 2:16), and as Yeshua says, “you will be hated by all because of My name” (Luke 21:17).

As we observe end times prophecies being fulfilled, this truth should cause us, as believers, to pay heed to the warnings in Scripture: “The end of all things is near; therefore, be of sound judgment and sober spirit for the purpose of prayer” (1 Peter 4:7). It is true that peace and love are indeed at the heart of the commandments, and therefore should be in the center of our hearts. However, the current organized global efforts we see taking place around us cannot truly bring peace, but only a counterfeit which leads to destruction. Tolerance of idolatry will only serve to dilute our convictions and cause us to compromise the truth that sets us free. “Here is the perseverance and the faith of the saints” (Revelation 13:10).

Common Word and the Christian Response

Declaration of Peace and Cessation of War

All For the Sake of Unity

Is the Cross Politically Correct?

You shall follow the LORD your God and fear Him; and you shall keep His commandments, listen to His voice, serve Him, and cling to Him. — Deuteronomy 13:14