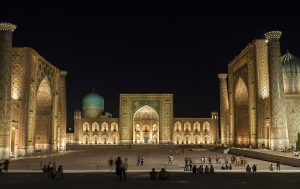 Every month our ministry chooses a different country where Christians are being persecuted and we commit to pray for them, as you can see in the sidebar here on our website. The country we are praying for in September is Uzbekistan. Much of the information regarding persecution in Uzbekistan that I’ve included here comes from Open Doors USA’s World Watch Research Uzbekistan: Country Dossier (WWR).

Uzbekistan is a country in Central Asia. It is one of two countries in the world which is doubly landlocked (the other being Liechtenstein): not only is Uzbekistan itself landlocked, but it is completely surrounded by landlocked countries. Over 4/5 of the country’s area is desert. The population of Uzbekistan is almost 33 million, with about half living in rural areas and half in urban centers.

There were significant communities of Christians in this area leading up to the advent of Islam in the region in the early 8th century. In the 13th century the Mongols took control, and by the 14th century there were active attempts to get rid of all the Christians in the empire, which were mostly successful. According to one theory, the current dominant ethnic group, Uzbeks, are believed to have taken their name from the Mongol leader Oz Beg (Uzbek) Khan, who converted to Islam and worked to spread it further throughout Central Asia as a way of unifying the factions under his command. In the late 1800s, the area came under Russian control, initially as a region inside Turkistan. After the formation of the USSR, the Russian Communist Party began a process of redrawing regional boundaries based on ethnic principles, and the territory of Uzbekistan was created as a result. Shortly thereafter the area was granted the status of a constituent republic. Although the boundaries were drawn along ethnic lines, ethnic Uzbekis were a minority in the capital city and the majority of Communist Party representatives for Uzbekistan were non-Uzbeki Slavs. Further demographic changes happened during World War II, when Russians, Poles, and others were relocated to Uzbekistan. It was during this period that most of the currently established populations of Christian communities were formed. When the August Coup occurred in 1991, Uzbekistan was one of the regions which supported this attempt. When the coup failed, Uzbekistan was among the Soviet republics which declared their independence from the USSR.

Despite its independence from the USSR, communism was still in the political heritage of the nation, and the former president of the Uzbekistan SSR, Islam Karimov, became the president of the new Republic of Uzbekistan. Shortly after its independence, there was a surge of ethnonationalism. Many residents of Uzbekistan who were not ethnically Uzbeki began to feel unsafe or unwelcome and decided to leave. The religion of Islam, which had been repressed under Soviet rule, quickly became a rallying point for the newly-independent nation. Islamic missionaries from Turkey and Saudi Arabia tried to influence the government to adopt theocratic ideas, but these groups were suppressed and expelled by the government. Thus, despite the resurgence of interest in Islam the state remains secular.

Karimov remained the president until his death in 2016. The Prime Minister succeeded him immediately, and won the subsequent election without any real opposition. With this change in leadership has come some improvements in human rights. For example, a notorious political prison was shut down and some internet censorship has been relaxed. Nevertheless, there are still abuses and the government is still considered authoritarian by human rights watch groups.

Around 349,000 Christians live in Uzbekistan, which is about 1.1% of the total population. The majority religion is Sunni Islam, representing about 95.8% of the population. Despite the overwhelming prevalence of Muslims, the nation itself is not governed by Muslim principles. As a former Soviet state, the government is secular and many of the leadership are still influenced by this. Many Muslims are only culturally so. However, the situation is complex, as one article explains: “On the one hand Islam is celebrated as a national heritage and a moral guideline, and politicians are often seen in religious contexts. On the other hand there are laws against for example proselytizing, and thus restrictions on religious expressions in the public sphere.”

Freedom of religion is granted in general terms in the constitution, as well as a separation of government and religion. However, religious groups must be registered, and those who fail to register or whose registrations are not accepted will be deemed illegal and will be subject to raids and arrests by police. Evangelism is prohibited, and religious literature is subject to censorship. Bibles are only legal if they have been printed within the country, and people aren’t allowed to bring a Bible outside their home. Protestant groups are especially distrusted due to their perceived connection with the West. “All categories of Christian communities are experiencing some form of persecution. Russian Orthodox churches experience the least problems from the government as they do not usually attempt to make contact with the Uzbek population” (WWR).

The brunt of the persecution is directed against converts from a Muslim background. It is common for such converts to experience social pressure from their families or communities. At times this may escalate into physical violence, detention, or expulsion from the community. This is encouraged by local Muslim religious and ethnic leaders. Whereas the state leaders tend to be more secular, the local officials are more likely to be religious, that is, Muslim. “As a result,most converts will do their best to hide their faith—they become so-called secret believers” (WWR).

A particularly public example of such a violent response from family happened in February 2019. As Voice of the Martyrs (Canada) relates, “Problems for ‘Umida’ (not her real name) began when her husband discovered that she had asked a friend for a Bible. In addition to locking Umida in their home to prevent her from going to church, he also banned her from seeing their two-year-old son. Eventually she was able to go live with her parents, along with their daughter. While living there, Umida attended church but continued to face threats. In a final move to find safety, the threatened woman attempted to leave the country. While at the airport, she was confronted by her husband who ruthlessly slit her throat.”

Worship services have been raided by police and military units, confiscating all the songbooks and other kinds of literature the church was using. The state wants all churches to be registered, and any that aren’t are considered illegal meetings. For example, here is a report from one such raid in 2018: “On 25 November, 20 plain clothes officials rising later to 40 officials raided Baptists meeting for Sunday morning worship in Yashnobod District in Uzbekistan’s capital Tashkent. For the first known time in such raids, members of the military – the National Guard – took part in the raid. Other agencies participating in the raid included the State Security Service (SSS) secret police, the Justice Ministry, and Yashnobod District Police. . . . Officials confiscated about 7,800 items of literature and DVDs, including all books and songbooks the Church uses for its meetings for worship. . . . Fourteen of those at the meeting were forcibly put into a bus and taken to Yashnobod Police Station. Officials also photographed and recorded the details of each individual who had attended the meeting for worship, including names, addresses, and workplaces. On 27 November police followed this up by visiting the home of one of those present for a “passport check” and also demanded to see ownership documents of the home. Those taken to the Police Station, including a 14-year boy, were kept outside in the cold while officials tried to force them to sign statements that they had participated in “an unauthorised meeting”. When they refused to do this, they were taken into the Police Station, their personal details were recorded, and they were interrogated for nine and a half hours until 9 pm that night.”

Although there have been positive human rights changes under the new president, these changes have not significantly improved the lives of persecuted Christians. “Officially registered churches like the Russian Orthodox Church, the Roman Catholic Church and the registered Baptist Church indeed noted slight improvements. But for other Christians, especially for Christians with a Muslim background, the situation has not changed significantly and Christians have continued to be targets for raids, arrests and oppression” (WWR).

Here are some specific ways you can pray for Christians in Uzbekistan: